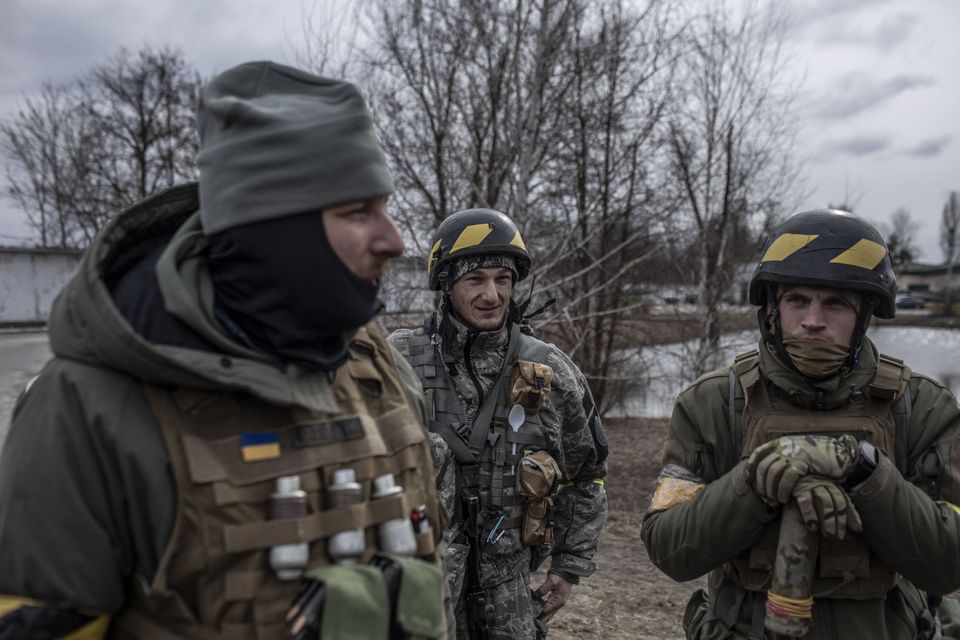 •Weapons from the West make a big difference—as do the Russians’ poor tactics, Ukrainian officers say

Every day for the past week, Russian forces have tried to fight their way through this suburb of Kyiv to reach the Ukrainian capital. And every day, Ukrainian troops have forced them to retreat, leaving burning tanks and armored personnel carriers behind.

“We go out to hunt and destroy them,” said Volodymyr, a Ukrainian special-forces team leader, as his squad, armed with a British .308 sniper rifle and British-made antitank weapons, waited for the latest Russian attack. “They certainly didn’t come here expecting that, expecting that we know how to fight.”

Volodymyr, left, with the Ukrainian special-forces team he leads, in Irpin on Friday.

The Ukrainian special-forces unit has been going on missions near Irpin every night.

The front lines here have largely held fast since the first day of the war, on Feb. 24, when a Russian column pushed in from Belarus to the north. In some places, including the neighboring town of Bucha, the Russians have been pushed back.

“Ukraine is fighting in a way nobody expected, not the Russians and not our Western partners,” said Mykhailo Podolyak, a Ukrainian presidential adviser and member of Kyiv’s delegation at cease-fire talks with Russia. “Kyiv was supposed to have fallen in three days.”

In part, that is because Ukraine has deployed elite special-forces units, trained by the U.S. and allies over the past several years, to defend Kyiv. Armed with British NLAW and American-made Javelin antitank weapons and Stinger antiaircraft missiles, they have helped blunt the Russian advantage in aviation and long-range missiles and artillery.

But Kyiv is also holding because the Russian forces here seem to have stuck to Soviet-style large maneuver tactics, moving in long convoys that are vulnerable to strikes by small reconnaissance units and by Ukraine’s fleet of Turkish-made Bayraktar TB2 armed drones, Ukrainian officers said.

Ukrainian forces took cover from shelling in Horenka, on the outskirts of Kyiv, on Friday.

“We’re in shock at how dumb their behavior is,” said another member of the Ukrainian special-forces unit who has been going on missions in the area every night. His unit, he said, had lost two soldiers since the war began nine days ago, and killed more than 60 Russians in recent days. “Now, we mostly focus on hitting their rear, their supply convoys, because if they don’t get fuel, they can’t do anything.”

Morale among Ukrainian defenders was high in Irpin on Friday, even as a Russian attack airplane flew low over a housing block and sounds of artillery rounds landing got closer and closer. Big plumes of black smoke rose to the north and south of town, along other major routes where Russian forces have been trying for more than a week to break into Kyiv.

Cloud cover has hampered Russia’s use of combat helicopters, soldiers here said. But to be prepared in case enemy choppers or attack planes approached, one of the soldiers took a position with a portable antiaircraft missile on his shoulder. Troops here say they operate their own small drones, including some with thermal cameras, to hunt for Russian targets.

“The Russians keep trying to enter and to encircle us, but they just can’t. We are together, we are organized, and we are strong-willed,” said Alyona Pavlova, an Irpin native and a soldier who was helping evacuate civilians from the town on Friday. “It’s a real war—and nobody was really ready at first, because nobody really believed that Russia would do something this mad.”

Civilians have fled the fighting in Irpin and other cities under Russian control.

Children were evacuated from the fighting in Irpin on Friday.

Ukrainian and foreign civilians have been streaming out of Irpin and cities beyond that are under Russian control, walking toward the relative safety of Kyiv despite shelling and airstrikes.

With a bridge over the Irpin River blown up, they have to climb down and under the span and then navigate a precarious pathway, their suitcases and pets in their hands. There was no formal agreement with Russia on the humanitarian corridor here, Ukrainian soldiers said, and the risk of a Russian shell hitting the area, something that happened before, was constant.

“I’ve spent seven days hiding in a shelter, but today the power went off and enough is enough,” said Mykhailo, a screenwriter who hiked with two backpacks for more than an hour from the other side of Irpin, near the next town of Bucha. He declined to provide his surname.

“The Russians are hitting everywhere, and it’s blowing up just outside my home now,” he said. It is the second time Mykhailo said he has had to move. He fled his hometown of Luhansk after pro-Russian forces took it over in 2014.

Tanya Rybko and her two children spent the entire morning walking from the town of Hostomel north of here. Russian forces control several parts of town, while Ukrainians are deployed in others. “And tonight, we were right in the middle of it all, between the two sides,” she said.

Russian troops, she added, had taken over a nearby apartment building, holding civilians hostage and seizing their phones so residents don’t phone in tips to Ukrainian troops. Hungry, the Russian forces were also looting local stores and homes, looking for food, she said.

Civilians evacuating from Irpin on Friday. Some of them are seeking shelter in the relative safety of Kyiv.

The risk of a Russian shell hitting the area was constant, Ukrainian soldiers said, as there was no formal agreement with Russia on a humanitarian corridor in Irpin.

Mohammad Amin, a Tunisian information-technology specialist, has been living in Ukraine for the past 10 years. On Friday, Mr. Amin, his Ukrainian wife and their 4-year-old son, with a small suitcase in tow, left the apartment they had purchased in Irpin and walked for nearly an hour to the bridge, hoping to get to Kyiv and then on to the European Union.

“I just cannot sit in the shelter anymore,” Mr. Amin said, out of breath. “The Russians, they are just jealous. They feel themselves defeated, and so they are just hitting apartments with civilians in them. They know very well where civilians live.”

He pointed to Ukrainian soldiers guarding the bridge, with bright-yellow tape on their helmets. “And these people,” he said, “they are heroes. Believe me, I am telling the truth.”