Africans are already feeling the impact of the war in Ukraine 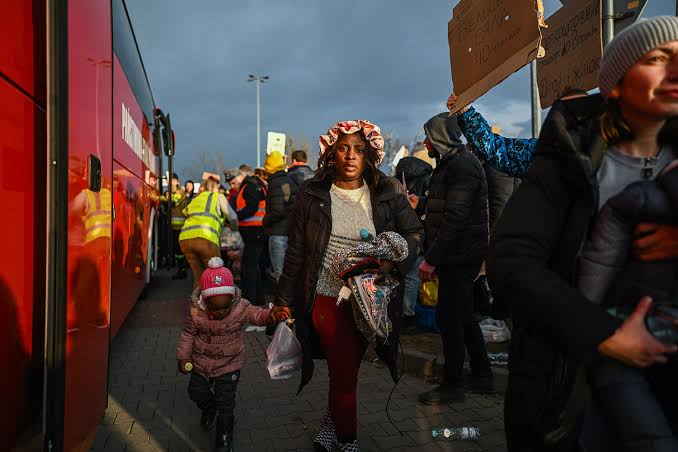 Since Russia’s invasion of Ukraine last Thursday, major developments that will reshape global politics both immediately and for years to come have rapidly unfolded one after the other. German Chancellor Olaf Scholz announced that Germany would boost its defense spending this year by $113 billion and meet NATO’s target of 2 percent of GDP in the future. The U.S. and European Union announced a new round of sanctions against Russia that has sent the ruble crashing. And the EU announced that its member states will grant Ukrainians fleeing the war the right to stay and work in the bloc for up to three years.

For many Africans, meanwhile, the war and its second- and third-order consequences serve as a grim reminder of the continent’s marginal place within the international system. But they also represent the hardening of an order historically designed and constructed to exclude Africans from the seat of global decision-making, while imposing on them hegemonic structures, decisions and outcomes they can neither contest nor avoid.

In an interconnected world already reeling from the effects of the ongoing coronavirus pandemic, a tremor in one part of the planet often causes ripples and at times tsunamis in distant locations. As is true for virtually the entire world today, the conflict in Ukraine is already casting a long shadow across Africa and its diaspora.

On the economic front, food prices are likely to rise due to disruptions to agricultural production and trade, with implications for the continent. African countries imported nearly $7 billion worth of agricultural products from Russia and Ukraine in 2020, with nearly half of Tunisia’s wheat reportedly coming from Ukraine. As for the increase in oil prices and Europe’s moves to diversify its sources of natural gas imports away from Russia, both could offer short and medium-term economic gains for oil and gas-producing African countries. But the logistical hurdles to cashing in on that opportunity remain considerable, not to mention the knock-on effect the increase in petroleum prices will have on virtually all other products.

More directly, the war has affected the thousands of Africans studying in Ukraine, an international education destination long favored by many Africans dating back to the Cold War and which continues to remain popular due to the relatively affordable cost of education. Several estimates put the share of Africans among foreign students in Ukraine at 20 percent, including approximately 8,000 Moroccans and 5,600 Nigerians,

according to Nigeria’s foreign minister.

Many of these African students live in Ukrainian cities that are now under siege. With flights grounded and their home governments struggling to support them, they tried on their own to escape the war, only to be blocked from boarding trains or crossing into neighboring countries at the border. Many reported having to walk for several hours toward Ukraine’s border with Poland, amid freezing winter conditions and the sound of gunfire, in some instances. Allegations of racial discrimination and segregation, verbal and even physical abuse by border security officials as well as locals in Ukraine and Poland are widespread.

African governments’ response to the invasion reflects their understanding of the disproportionate effect a global crisis like this one will have on Africa’s economies and security environment.

The Africans stranded in Ukraine, as well as activists, diplomats and ordinary citizens on the continent and among diasporas, have been raising awareness through the Twitter hashtag #AfricansinUkraine, while also organizing logistical support for evacuation efforts through WhatsApp, Telegram and other social media platforms. Fortunately, their stories went viral, forcing their way into the coverage of an initially indifferent international news media and drawing the attention of many African governments, including Nigeria and South Africa, as well as the African Union, the U.N. High Commissioner for Refugees and the three African nations currently on the U.N. Security Council—Gabon, Ghana and Kenya. All of them have condemned the allegations of discrimination against Africans and other non-white groups in Ukraine, and called on Polish and Ukrainian authorities to enable their safe passage.

Many Africans trying to depart Ukraine have since found refuge in other neighboring countries, including Romania, Hungary and Moldova, with Nigerian and South African diplomats coordinating assistance for Africans from countries without diplomatic missions in Ukraine. But some reportedly remain trapped inside Ukraine unable to get out of harm’s way. And even for those who have made it out of Ukraine, including the many students who have not completed their studies, their immediate future remains uncertain, with the possibility that many of them may have to return to their home countries.

Meanwhile, the EU’s announcement of a wide-ranging emergency assistance package including some 500 million euros worth of arms and other aid to Ukraine’s military as well as the welcome it has provided to Ukrainian refugees has not gone unnoticed by Africans. Former German Chancellor Angela Merkel’s 2015 decision to open the country’s doors to refugees is regarded as a turning point in European politics, fueling the rise of right-wing populist parties on the continent, and the anti-migrant backlash likely played a role in the EU’s lukewarm reception to the notion of settling Afghans within the bloc after the Taliban takeover of Afghanistan last year. Securitization has long informed the bloc’s migration policy, especially with regard to the Mediterranean Sea, across which many would-be migrants, including many primarily from Africa, have for years made risky attempts to flee to Europe.

The EU has paid African governments millions to keep African migrants from reaching European shores; set up centers in Niger and Rwanda to process asylum seekers; funded the so-called Libyan Coast Guard, which has been accused of widespread human rights abuses, to catch and return migrant boats to North Africa; and spent billions to expand its own border security force as well as research new technologies, such as surveillance tools and sound cannons, to keep migrants from entering the bloc. All of these developments have drawn criticism by human rights groups of an inward-looking “Fortress Europe” walling itself off from its neighborhood using legally and ethically dubious methods. And while many defend the apparent relaxation of those standards for fleeing Ukrainians on grounds that many of these countries share longstanding cultural and geopolitical affinities with Ukraine, the racialized double standards involving migrants from a majority white, Christian country on one hand and darker-skinned non-European people—many from Muslim-majority countries—on another are lost on few, Africans included.

African countries are no less attentive to the geopolitics of the conflict, with many of them moving swiftly to call for a defusing of tensions and offering to be part of an international mediation effort. Those calls drew mockery and criticism in some quarters, including among some Africans. But if anything, their response reflects their understanding of the disproportionate effect a global crisis like this one will have on Africa’s economies and security environment, as well as the continent’s longstanding contributions to multilateralism and international norm-making, which it scarcely receives credit for. Martin Kimani, Kenya’s ambassador to the U.N., alluded to many of those themes in a strongly worded Security Council speech criticizing Moscow’s actions in Ukraine that compared Russian moves there to actions taken by European powers in Africa during the so-called “Scramble for Africa.”

While the speech resonated with Western commentators for obvious reasons, Kimani’s arguments and position are likely a minority one among African governments and citizens. Of the 87 countries that co-sponsored a U.S.-led United Nations Security Council resolution last week condemning Russia over the Ukraine invasion, which Moscow subsequently vetoed, only seven of them were African—Niger, Liberia, Eswatini, Botswana and the three African Security Council members, including Kenya.* The General Assembly resolution from this week to the same effect won 26 votes from the continent, but still with some notable abstentions, including South Africa, Algeria and Mali.* The African Union and its member states have adopted somewhat neutral positions, including the obligatory diplomatic notes of “concern” and calls for a peaceful resolution to the crisis. Some commentators have traced this delicate balance struck by African governments to Russia’s growing security footprint in Africa, including the Sahel region, where the future of France’s counterterrorism mission remains in question. But while it is true that few African countries have moved to condemn Russia in stark terms, few have explicitly supported Moscow, either.

One possible explanation for African states’ lack of overt support for Russia may lie in the fact that Moscow has less clout in Africa than meets the eye, at least as compared with the “Big 3” of China, the United States and the EU, as I suggested in a recent piece for WPR. It may also be for the simple reason that African countries, like other geopolitical blocs, are hedging their bets in what remains a Western-led global order in which the U.S. and its allies retain structural advantages in the international system, as has been made painfully clear by recent moves to isolate Russia economically and diplomatically. That Beijing, which nominally supports Moscow’s arguments about what it regards as NATO aggression, refuses to wholeheartedly embrace Russia amid the current crisis and recently clarified that the two countries’ relationship is not an alliance, is likely another signal African governments have interpreted as a cautionary note.

The wider lesson they have undoubtedly taken from the first week of war in Ukraine is a reminder of the cold reality of power and geopolitics underpinning an international system that imposes so many of the costs of its decisions on Africans while granting them few, if any, benefits.

*Editor’s note: The original version of this article incorrectly stated that only seven African countries had voted in favor of this week’s General Assembly resolution criticizing Russia’s invasion. The reference should have been to co-sponsoring last week’s vetoed Security Council resolution. The article has also been revised to include the outcome of the General Assembly resolution, for which 26 African countries voted to approve. WPR regrets the error.

Chris O. Ogunmodede is an associate editor with World Politics Review. His coverage of African politics, international relations and security has appeared in War on The Rocks, Mail & Guardian, The Republic, Africa is a Country and other publications. Follow him on Twitter at @Illustrious_Cee.