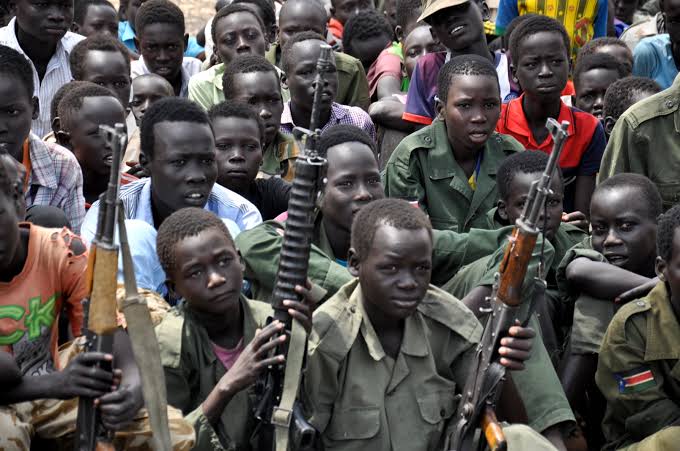 The Islamic State of West Africa Province (ISWAP) have allegedly recruited 150 child soldiers who were recently recruited and camped at Sabon Tumbus, Borno State, in suspected preparation for deployments.

Human Intelligence (HUMINT), a professional body which specialises in the extraction and collation alleged that the ISWAP child soldiers will be employed to either infiltrate locations, gather intelligence for the terrorists or be used for diversionary and direct attacks on their targets.

The intelligence body therefore advised that troops remain vigilant and aggressive, irrespective of the rules of engagements or the age of the criminals in combat situations.

This is not the first time stakeholders are raising an alarm over reports of Boko Haram and ISWAP terrorist groups recruiting children for use in battlefields as Soldiers across Nigeria, Cameroon, Niger and Chad.

Eons Intelligence has on more than one occasion called attention to this terrorist’s usual mode of operation, due to the human and material losses they suffer in major military operations in the various theatres of war.

According to Colonel Timothy Atigha, a spokesman for the MNJTF, the terrorists are said to rely on child soldiers for some missions in order to divert military attention.

“Information on this disturbing development was brought in by human intelligence sources and corroborated by concerned individuals and groups. Boko Haram terrorists themselves further confirmed the atrocious acts when they posted pictures of children dressed in military fatigues and holding assault rifles in a video released during a celebration of the Muslim holiday Eid al-Adha,” he said in a recent Voice of America Interview.

The Nigerian military has described the antic as the latest in a retinue of brutal and inhuman tactics deployed by Boko Haram and ISWAP, whose goal is the setting up of an Islamic caliphate in the region. Boko Haram and ISWAP have long engaged in mass abduction of schoolgirls, sexual enslavement of women and the mass murder of innocent civilians, according to government officials and rights groups.