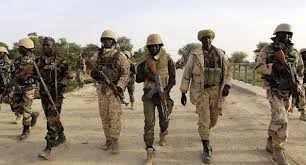 Ambushes mounted by jihadist insurgents have become commonplace in Nigeria’s decade-long war on terror within its borders, with military personnel and weaponry increasingly lost. An estimated 337 Nigerian soldiers have been killed from insurgents’ ambushes since 2019, according to a recent report. The army is now deployed in 33 out of 36 states across the country, and reports in Nigerian media of attacks on military are frequent.

In September 2021, 12 soldiers attached to Operation Hadi Theatre Command travelling from Monguno to Maiduguri were killed in an ambush. The insurgents reportedly took away three gun trucks as well as substantial cash. In April 2021, 31 Nigerian soldiers were reportedly killed when extremists ambushed a military convoy escorting weapons in Mainok near Maiduguri, killing troops and seizing weapons. In March 2020, an ambush near the village Goneri in Borno state wiped out an entire army artillery unit, leading to the death of at least 50 soldiers. Terrorists regularly seize weapons during these ambushes, which they deploy in further attacks.

A particularly debated attack came on 12 November 2021 in the well-known epicentre of the Boko Haram insurgency, the Maiduguri region in Nigeria’s Borno state up to Damaturu near the Chadian border, where residents continue to live in fear; the military has previously repelled attacks from the group, with casualties on both sides. A Brigadier General and Commander of the Special Forces team near Chibok, Dzarma Zirkusu, received a distress call that Askira, a small community 150 kilometres south of Maiduguri, was under attack by insurgents. Reportedly a convoy of around 12 gun trucks, the insurgents almost overwhelmed the military who called for reinforcements. A gallant commander who prefers to lead from the front, General Zirkusu launched counteroffensive support for his soldiers. A vehicle ripped with bombs belonging to the Islamic State’s West Africa Province (ISWAP) drove into his convoy, killing the commander and three colleagues. Questions have been asked whether this is an intelligence failure or calculated internal sabotage.

Since the fight against insurgency started, civilians have been wrongfully harmed in both crossfire and air force bombardments. Many of these mistakes are said to result from conflicting commands due to rivalries among security agencies.

For instance, on 25 April 2021, a Nigerian Air Force fighter jet targeting Boko Haram extremists mistakenly bombed a truck in the Nigerian Army, killing over 20 officers. On two occasions in September 2021, the Nigerian Air Force bombed dozens of unarmed civilians in a fish market in Daban Masara, Bornu State, killing at least 60 people. The military subsequently insisted some civilians killed were collaborators delivering logistics support to terrorists. A second fighter jet wrongly hit a civilian population in Buhari village in Yunusari local government, Yobe State, for which the Nigerian Air Force took responsibility. In January 2017, the Nigerian Air Force mistakenly bombed a camp of internally displaced persons in a village known as Rann in Bornu State, in what the Defense Headquarters described as a lack of appropriate marking. The error led to the killing of more than 100 refugees and aid workers. In most cases, President Buhari merely issued a bland media release offering rehashed condolences.

The need for enhanced intelligence gathering

Since the rise in violent attacks perpetrated by so-called ‘bandits’ across the country’s northern region, the government has struggled to differentiate between terrorists and bandits as forms of criminality. The government in 2021 bowed to pressure to designate bandits as terrorists. These overlapping security crises have the potential to further overwhelm the state apparatus. Bornu State Governor Babagana Zulum suggested the Buhari government consider using mercenaries in the fight against insecurity. While the Nigerian President and security agencies operate in denial, the governor insists that terrorists continue to control two local governments in his state, collecting taxes and freely conducting weddings without confrontation.

At worst, failures to enforce security could erode faith in Nigerian democracy or lead to political disintegration. A cocktail of strategies will be needed, including political solutions and concessions to violent groups where necessary. For instance, a dialogue with groups who feel currently excluded from power might be helpful. The failure of military action over the years to yield results must be recognised, especially the method’s unanticipated and counterproductive consequences of civilian deaths and inflamed tensions. The European Union has cautioned the Nigerian government to look beyond military means to address insecurity.

Numerous security lapses, including incidents such as recurrent jailbreaks, amplify the importance of resolving intelligence failures. Nigeria’s recent purchase of drones from China to support ground troops, designed to gather intelligence and guide land movements, should be met with caution. Technological upgrades and innovations cannot be a replacement for thorough institutional reform.

Nigerian security agencies must urgently retool their intelligence gathering architecture and enhance inter-agency coordination. While real-time information sharing provided by drones may be a key part of such endeavours, the purging of personnel with dual loyalties who leak sensitive information must be accompanied by substantial and thoughtful non-military options. Only political will from the top can make an impact, which spells trouble when the Commander-in-Chief, President Buhari, is largely seen as lacking the capacity to govern.

Photo by David McBee from Pexels