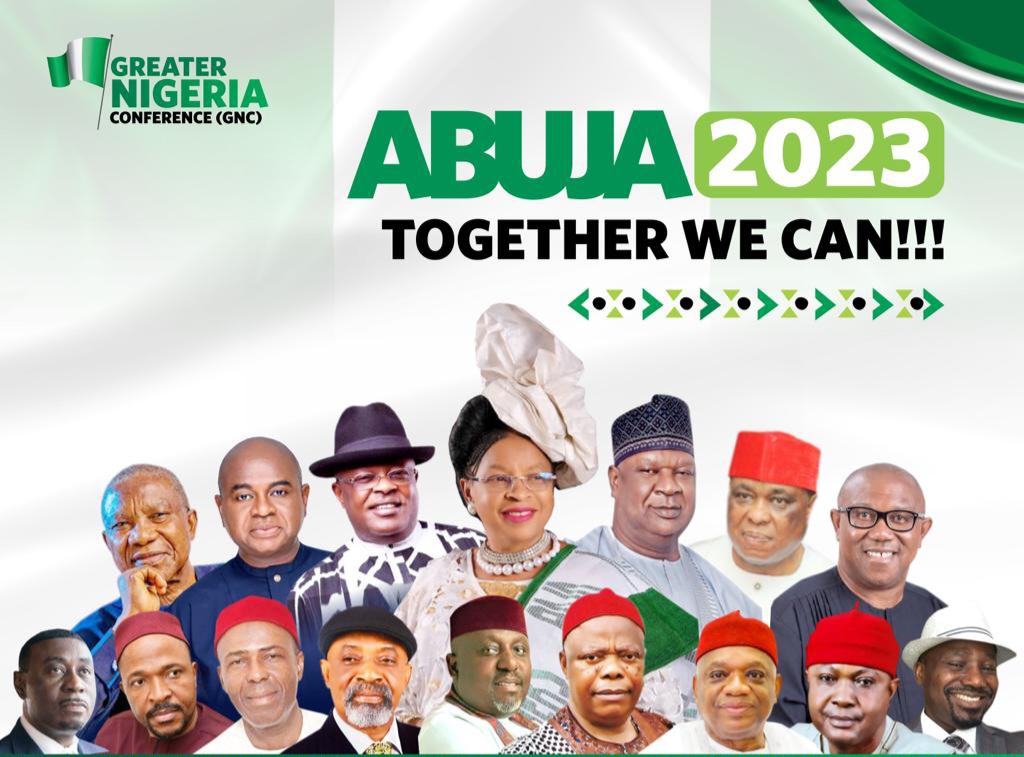 •Wike’s candidacy, others, a game to divide South for Northern presidency  – Afenifere

The Yoruba socio-cultural group-Afenifere, the Middle Belt Forum, Pan Niger Delta Forum (PANDEF) and other leaders in the Southern region have pledged their support for an Igbo president in the 2023 general elections.

The groups stressed that an Igbo President is the only key that will drive peace, unity and inclusion as well as national development; adding that the 2023 presidency rightfully belongs to the southeast region.

These were made known on Monday in Abuja at the Greater Nigeria Conference organised by Nzuko Ummunna, an Igbo Think Tank.

Edwin Clarke, Elder statesman and leader of PANDEF, decried the attitude of regions who see themselves as  “winners” taking it all, feeling that they own the country, and are born to rule;  and that, if they rule, the country will burn. This, according to him, is unjust and unacceptable.

While stressing that an Igbo president will guarantee the peace and progress of Nigeria, the elder statesman pointed out that the southeast, like any other region, has the men and women, who are competent, patriotic, loyal, intelligent, industrious, healthy and active, whom Nigerians will be proud of, to occupy the position.

“The Motto of Nigeria is “Unity and Faith, Peace and Progress”. Where is the Unity I ask, where is the Faith in our beloved Country Nigeria; where is the Peace; and are we progressing? Let us not deceive ourselves. I am a strong advocate and believer in the Motor of our dear Country, and that is why my doors are open to all. But are we working towards the attainment of this Motto? You cannot marginalize and oppress people, and expect them not to speak out,” he said.

“The people of the South East deserve to have a sense of belonging in this Country. So, the clamour for a president for the South’s last geopolitical zone is supported by me. Today, with no other tangible reason for still wanting to hold on to power, some people are talking about merit and competence.

Let us accommodate one another, and be fair to one another. Let all other Nigerians support a South-Eastern Candidate for President, come 2023. I repeat, very soon, I will be 95 years old. I have spent more than 70 years of this period in Nigerian affairs. I have seen it all. For the peace and sanity of the country, I appeal to all, in the name of the Almighty  God, to make this concession to the Igbos, to present a President Nigeria,” Clarke urged.

Chief Ayo Adebanjo, leader of Afenifere disclosed that the reason why the South East region has not ruled is that the Northern people do not want to give up power and have further devised a means to ensure that the Southern region remains divided.

The leader warned that the declaration for the presidency by some  Southern candidates is a game that would further divide the south and pave the way for the North to rule again.

“I asked Tinubu, do you believe they will make you president?  They asked Osinbajo to contest, they wanted to divide the west first, then they went to the south.  I am appealing to South-South candidates Wike and others, they are not helping the issue, they are helping the North, it’s a game to divide us, even in the South-East. The North doesn’t want to yield power and they know the way to do it is to divide the country. The problem is ourselves, let us unite ” he cried.

He regretted that the same Northern region which cried in 2019 that it was the turn of the North, and after ruling for eight years is now claiming that competence should be the yardstick for the presidency to further marginalize the Eastern region.

He, however, stressed that even if competence is the yardstick for the presidency, the east remains the most qualified

“In 2019,  they said it was the turn of the North, now that it is the turn of the Southeast, they have now propounded a new theory, the question of merit. If it was a question of merit, who in the North? From Balewa to Shagari, if it’s for merit who will stand there?. If it was based on merit today, till kingdom come,  the east alone will produce the president”, the Afenifere leader said.

He, however, urged the southeast leaders to unite in this fight for the presidency.

Dr Pogu Bitrus, Chairman of the Middle Belt Forum who delivered the keynote speech, described it as clumsy and even illegal for the southwest to seek the presidency at this time, after Obasanjo ruled as president for eight years and Osinbajo ruled for eight years as vice president.

He stated that by design, the zoning and rotation policy is supposed to make it possible for each of Nigeria’s six geopolitical zones to occupy the seat of president for eight years over 48 years.

He also recalled that in 1999, the political class had a consensus that political power had to shift to the Southern part of Nigeria. “We micro-zoned the south-west, to address a national problem, don’t we agree that the situation we are in  calls for a similar approach?”

“It will be disingenuous for anyone to argue that where the president comes from does not matter, zoning does matter.  It’s only fair and equitable that the presidential position is only occupied by a Nigerian, not of Buhari’s zone, the south should decide,” Bitrus further said.

The leader further decried that the Nigerian constitution is skewed to favour the North. “We don’t say this because people say “don’t say that ”, but that is one of our problems in this country. We should think twice, Nigerians are not fools, it is the turn of the southeast irrespective of the situation on the ground.   Nigeria cannot be the stable and prosperous country of our dreams if some of its constituents behave like they are masters.

Earlier, the president, Nzuko Umunna, Senator Chris Anyanwu stated that equity, justice, inclusiveness and mutual respect, which according to her, are the glue that binds together nations are weakening in Nigeria.

“That is why the cries for equity, justice and inclusiveness will ring higher and higher and the restiveness in the Nigerian society will grow more and more and the tears and pulls from all directions on the fabric that holds the nation together will become more forceful and more desperate until it is completely shredded. Today, we will talk. Those who know better will talk. Those who have seen it all with talk. And we hope that those who have ears will hear. Equity will decide the future of Nigeria,” she said.

“Now, no one wants to make the sacrifices necessary to make Nigeria work better. Now, the “give and take” that engenders social harmony and peace has disappeared. Those who think they are stronger are gorging themselves on our national cake; taking and taking without seizing while probing the others of the right to also take. This unbridled hunger and brutish disregard for the rights of others has thrown Nigeria into multi-fronted, multi-layered social unrest. Those left behind; those denied their rights; those robbed of a sense of belonging and driven to the flanks of society are coming back to take their pound of flesh. Now we cannot sleep with two eyes closed. Now, we cannot travel safely; they are coming for us in our homes and demanding their share of the national cake.

“Without Equity and Justice; without Inclusiveness; without mutual respect among the component units of this society, the future is bleak for Nigeria. All parts of Nigeria have woken up to the fact that they have equal rights and therefore hold equal stakes in the Nigerian enterprise. Therefore, no group is willing to sit at the sharing table and watch others gorge themselves on the fruits of our patrimony and not partake. The political parties will decide this year either to go for a Greater, more inclusive and more united Nigeria or a weaker, more frightening, more fragmented pseudo-Nigeria,” she stressed.

According to the president, the conference is designed to explore the issues and hammer on that one essential step that must be taken now to restore hope for a Greater Nigeria which is South East Presidency.