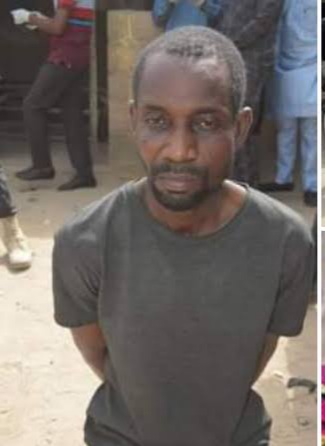 Hanifa was reportedly abducted on her way home from an Islamiyya school in the company of other pupils at Kawaji community in Yankaba area of Kano metropolis on December 4, 2021.

She was said to have been whisked away in a commercial tricycle. According to the Kano State Police Command, the suspects had demanded N6 million ransom for her release. Eventually, Hanifa was allegedly poisoned to death and her body cut into pieces, put in a bag and buried in a shallow grave.

According to Wasila Dahiru, an aunt of the victim, Hanifa’s abductor was arrested, on Wednesday, while he was trying to receive part of the ransom.

Following an investigation by the police command, the girl’s decomposed body was discovered and the prime suspect’s arrest made public on Thursday.

Nigerians who took to social media to condemn the incident, demanded death penalty for the suspect here are some of the reactions.

@Sheikweeder
Islamically and kano state constitution, death penalty is the final judgement to these heartless duas who prepared the shame of akhira than that of duniya..lets retweet and advocate #JusticeForHanifa .. https://t.co/7dKGnEHvsd

@Dawisu
The Kano Anti-Kidnapping Law states that anyone that kidnaps someone & the victim dies in the process death penalty is the punishment for the kidnapper! I call for the death penalty for the barbarians that kidnapped & killed this little angel #JusticeForHanifa ? https://t.co/dj1HoGtwMd

Iam_bayyah
Wondering how he poisoned her, how he watched her struggling to die and how he cut her into pieces. Is he really human?”.

@HilarySeiyefa said
Hearing how this beautiful child was killed in a gruesome manner brought chills down my spine. Some Humans are really heartless and shouldn’t be considered as living things. Such evil & demonic act the perpetrators should be killed #JusticeForHanifa

the_scholar1 said, “Noble Kids school should be demolished to the ground, the school authorities should bear part of the consequences.

@cbngov_akin1
SAD NEWS Kano Anti-Kidnapping Law should be apply here. This animal should face CAPITA PUNISHMENT for killing this little Girl, HANIFA, death penalty should be the gain for all the barbarians that kidnapped & killed this little angel We should ALL voice out.