Skip to content
JUSTICE SECTOR & ANTI-CORRUPTION NEWS US AND CANADA 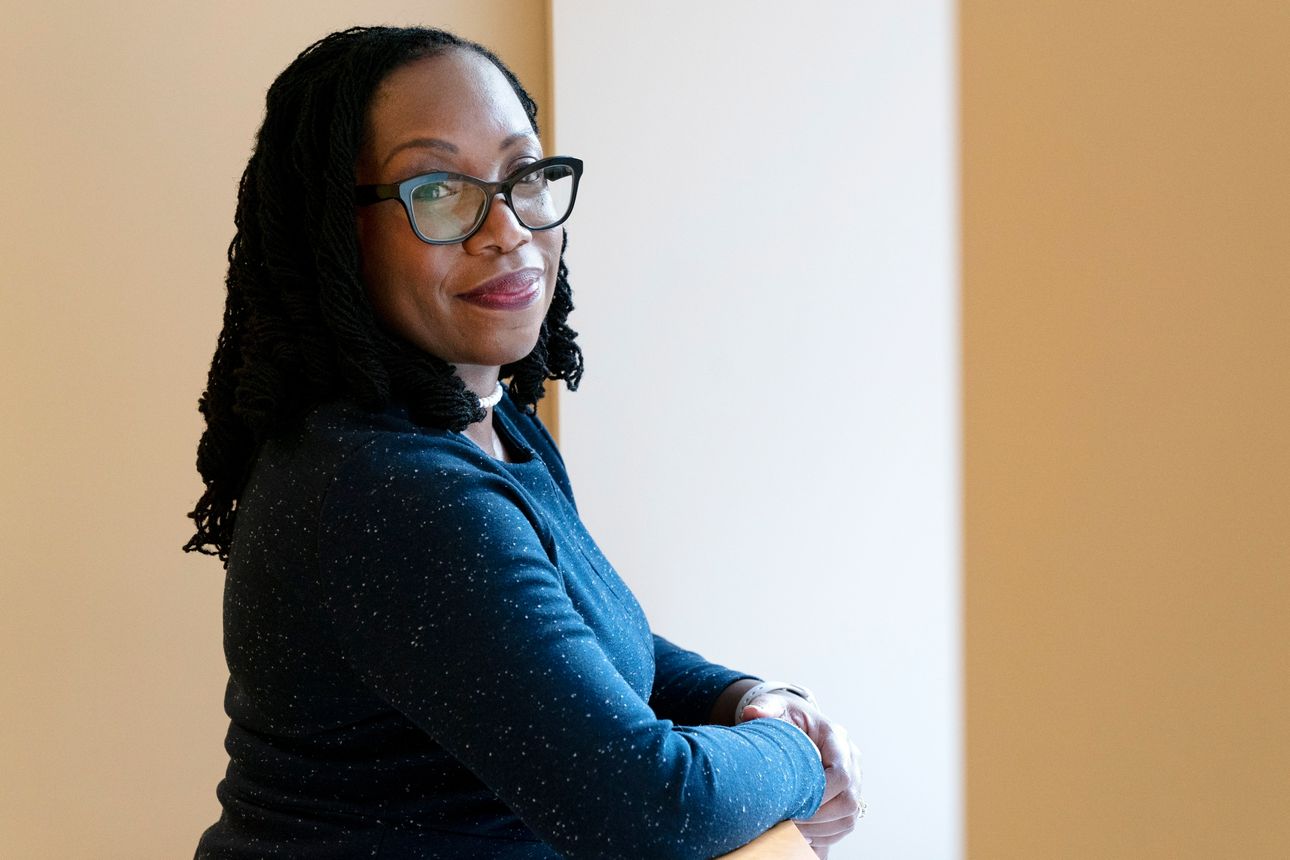 President Biden on Friday selected Judge Ketanji Brown Jackson to fill a vacancy on the Supreme Court, the first Black woman nominated to be a justice on the nation’s highest court.

“For too long our government and our courts haven’t looked like America,” Mr. Biden said at the White House, introducing the judge as a “proven consensus builder” and a “distinguished jurist.”

“I believe it’s time that we have a court that reflects the full talents and greatness of our nation with a nominee of extraordinary qualifications,” he said.

Judge Jackson, 51 years old, serves on the U.S. Court of Appeals for the District of Columbia Circuit, one of the nation’s most influential courts and often a steppingstone for Supreme Court justices.

She joined that court in June after eight years as a federal judge in the nation’s capital, where she wrote more than 550 opinions, including one from 2019 in which she ruled former White House counsel Don McGahn didn’t have absolute immunity from having to testify in a congressional investigation of then-President Donald Trump.

In his remarks, Mr. Biden said Judge Jackson would bring a breadth of experience to the Supreme Court, citing her work as a public defender, a private-practice lawyer and her posts on two federal courts. He also pointed to her family’s roots in law enforcement, including a brother and uncles who served as police officers.

If confirmed by the Senate, Judge Jackson would replace Justice Stephen Breyer, a member of the court’s liberal wing who announced in January that he would retire at the end of the court’s current term. The nominee served as a law clerk to Justice Breyer early in her career.

Judge Jackson said she was “humbled by the extraordinary honor of this nomination” and praised Justice Breyer, saying he “exemplified every day in every way that a Supreme Court justice can perform at the highest level of skill and integrity, while also being guided by civility, grace, pragmatism and generosity of spirit.”

Judge Jackson would be the third Black justice in Supreme Court history, following Thurgood Marshall and Clarence Thomas. If confirmed, her arrival also would mark the first time the high court has included four women.

Mr. Biden’s nomination won’t change the balance of power on a conservative high court that has six justices appointed by Republican presidents, including three by former President Donald Trump.

A simple majority in the Senate is needed to confirm a high-court nominee. The Senate is split 50-50, but Democrats wield control because Vice President Kamala Harris serves as a tiebreaking vote.

Mr. Biden has said he would nominate a Black woman for the vacancy, saying such a move was long overdue. His announcement marked the second anniversary of his making that pledge, which came during a debate in South Carolina. The state, where Black voters play a pivotal role in state politics, helped revitalize Mr. Biden’s flagging presidential campaign and put him on the path to win the Democratic nomination.

The White House and Republican leaders have both tried to set the stage for a less contentious process than the battles during the Trump administration, though entrenched disagreements continue to exist between the two parties on the legal philosophy a Supreme Court justice should embrace.

Judge Jackson will receive a prompt hearing by the Senate Judiciary Committee in the coming weeks, Senate Majority Leader Chuck Schumer (D., N.Y.) said. “Senate Democrats will work to ensure a fair, timely, and expeditious process—fair to the nominee, to the Senate, and to the American public,” he said.

Several Republicans, including Senate Minority Leader Mitch McConnell (R., Ky.), said they planned to meet with Judge Jackson and study her record ahead of her confirmation hearing. “The Senate must conduct a rigorous, exhaustive review of Judge Jackson’s nomination as befits a lifetime appointment to our highest Court,” Mr. McConnell said.

Sen. Lindsey Graham (R., S.C.), who had previously made favorable comments about another contender for the nomination, Judge J. Michelle Childs, said in a tweet Friday that Mr. Biden’s selection showed the president had been swayed by liberals. “The attacks by the Left on Judge Childs from South Carolina apparently worked,” he tweeted.

Mr. Graham was one of three Republicans who voted to confirm Judge Jackson to the D.C. Circuit in June on a vote of 53-44, with support from all 50 members of the Democratic caucus. GOP Sens. Susan Collins of Maine and Lisa Murkowski of Alaska also backed Judge Jackson, who was part of the administration’s first slate of judicial nominations last year.

Ms. Collins praised Judge Jackson’s academic and legal credentials in a statement Friday and said she would be conducting a thorough vetting of the nominee.

Ms. Murkowski said Friday that her previous vote for Judge Jackson wouldn’t indicate support for her Supreme Court nomination. “I am committed to doing my due diligence before making a final decision on this nominee,” she said.

Judge Jackson’s nomination to the Supreme Court is part of a broader push by Mr. Biden to diversify the federal judiciary, in terms of race, ethnicity, gender and professional experience. Of the nearly 50 life-tenured judges Mr. Biden has placed on the federal courts so far, three-quarters have been women, and two-thirds have been people of color.

“We need Black women at every level of the judiciary, and especially on the highest court of the land,” said NAACP general counsel Janette McCarthy Wallace.

Judge Jackson’s confirmation would produce a court that looks more like the American public—including its partisan divisions.

Justices don’t always vote in lockstep, and race, gender or religion don’t necessarily determine how they view the law. But the Supreme Court’s conservative majority, strengthened by three Trump appointees, has chosen to reconsider a range of legal precedents liberals have considered sacrosanct, including pending cases revisiting abortion rights and the use of race in college admissions. If the outcomes in such cases echo the ideology of the court’s conservative and liberal camps, Judge Jackson’s arrival could underscore America’s tensions as much as its diversity.

Judge Jackson previously served as an assistant federal public defender and as the vice chairwoman of the U.S. Sentencing Commission, an independent agency that provides sentencing guidelines for the federal courts.

In 2011, she and other commissioners voted to retroactively apply a new law easing penalties for possession of crack cocaine. At the meeting taking up the vote, she spoke at length at what she described as the gross injustice of the prior policy of treating offenders trafficking in powder cocaine more leniently.

In 2019, she blocked the administration from expanding a policy known as expedited removal that allows the government to quickly deport immigrants who crossed the border illegally without involving immigration courts. The decision was reversed on appeal by the D.C. Circuit, which said federal law gives the president “unreviewable discretion” to shorten and speed up the deportation process.

In late January, Supreme Court Justice Stephen Breyer announced his plan to retire after serving more than two decades on the court. The departure gives President Biden the opportunity to deliver on his promise to nominate the court’s first Black woman. Photo: Kevin Lamarque/Reuters (Video from 1/27/22)

In a different case that same year, Judge Jackson threw out a lawsuit by conservation groups that sought to block construction of a proposed border wall through protected federal lands in New Mexico, saying Congress had precluded judicial review of the project.

The judge handled a closely watched business case in 2013, rejecting the meat industry when it brought a free-speech challenge to a U.S. Department of Agriculture regulation requiring companies to disclose country-of-origin information about their meat products. She was affirmed on appeal.

Because Judge Jackson only joined the D.C. Circuit appeals court last summer, she has a short record there so far. She replaced Merrick Garland after he left the judiciary to become attorney general.

Judge Jackson was born in Washington, D.C., to two public school teachers, who moved her family to the Miami area when she was a child. Her parents, she said, named her “Ketanji Onyika” to express pride in their African ancestry. Her father would later become an attorney with the Miami-Dade County School Board and her mother a principal at a public magnet school.

She and her husband, Patrick Jackson, a surgeon at MedStar Georgetown University Hospital in Washington, have two daughters.

—Jess Bravin contributed to this article