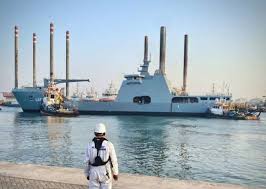 This comes 13 days after the ship had paid a similar historic visit to Port of Mombasa, Kenya, according to a statement on Wednesday signed by Commodore  AO Ayo-Vaughan, Director of Information, Nigerian Navy.

On arrival at Cape Town, NNS KADA was received by Nigeria’s High Commissioner to South Africa, Mohammed Manta and a delegation from the Naval Headquarters led by the Flag Officer Commanding Naval Training Command, Rear Admiral Monday Unurhiere who represented the Chief of the Naval Staff (CNS), according to the statement.

In his goodwill message to the ship crew, Nigeria’s High Commissioner to South Africa stated that the visit of the Landing Ship Tank will further strengthen bilateral relations between Nigeria and South Africa.  Manta added that the induction of NNS KADA will further bolster the Federal Government’s effort in ensuring adequate maritime security in Nigeria and the West African Sub-Region.

Relatedly, while delivering his remarks during the reception of the ship, the CNS representative, Flag Officer Commanding Naval Training Command, Rear Admiral Monday Unurhiere reaffirmed that the visit will enhance collaborative efforts between the Nigerian and South African navies. Rear Admiral Unurhiere further added that the induction of NNS KADA into the Nigerian Navy Fleet will no doubt reinforce security in the Gulf of Guinea region.

Accoridng to the statement, NNS KADA is scheduled to carry out naval diplomatic activities before departing for Luanda, Angola during her stay in South Africa.

“Additionally, sporting and social functions earmarked for the visit include a volleyball match with the South African Navy Fleet as well as a cocktail and ceremonial sunset to be hosted by the ship,” the statement read.

It would be recalled that NNS KADA left the United Arab Emirates on Friday 1
April 2022 and she is expected to arrive Nigeria on 27 May 2022.