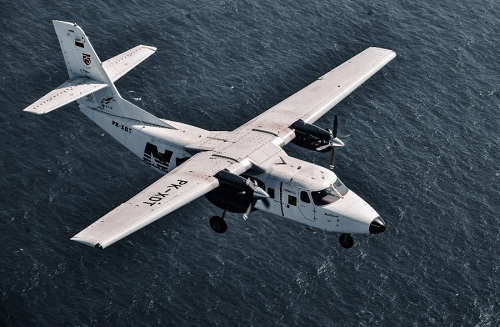 Following a meeting between the Indonesian Ambassador to Nigeria Usra Harahap and the executive vice-chairman of Nigeria’s National Agency for Science and Engineering Infrastructure (NASENI), Mohammed Sani Haruna, both countries accepted a draft letter of intent on bilateral defence cooperation.

The NASENI’s mission is to further the transfer of technologies to Nigeria in various areas including defence and aeronautics. Haruna told The Guardian Nigeria that Indonesia would assist the country in developing “aircraft, both civil and military, the armoured personnel carrier, and other equipment needed by the military”, with approval from the Nigerian Federal government.

Reports from the previous week furthermore indicate that NASENI is planning to procure N-219 transport aircraft and two helicopters which would be manufactured domestically (although it is most likely that only the assembly phase would take place in Nigeria). Other military equipment included in this forthcoming deal could include armoured personnel carriers as well as hangar equipment from the Indonesian company PT Dirgantara.

Links between the two countries go back to 1965, when Indonesia opened a diplomatic mission in Lagos (later transferred to Abuja). Ties have, however, been quite loose up until the 21st century, when both countries’ heads of State visited each other in 2001, 2005 and 2006.

Nigeria is Indonesia’s second largest trade partner in Africa, and both countries are involved in international organizations such as the Organization for Islamic Cooperation, the Developing 8, or the Non-Aligned Movement. Military equipment has not been at the core of their economic links, rather focused on energy, civil aviation and agriculture.

Their willingness to develop defence cooperation was displayed during meetings held in 2019 and 2020 between Nigerian and Indonesian diplomats, including an encounter between the Indonesian ambassador and Nigerian Minister of Defence Bashir Salihi Magashi. In addition to the procurement of Indonesian equipment, cooperation in the field of military training had then been mentioned.

The rapprochement that has been taking place over the past few years shows that this relationship is viewed positively on both sides. Nigerian President Muhammadu Buhari has expressed his willingness to develop technological and industrial know-how in the country. Indonesia, for its part, deepens its ties with an important player in the region, while securing the export of its N-219 transport aircraft, which is still undergoing certification. With this agreement, Nigeria could join China, Mexico and Turkey, which have expressed interest to the Indonesian manufacturer Dirgantara in the past years for the procurement of the aircraft. The relationship between Nigeria and Indonesia is therefore on the rise, but it has experienced some bumps in the road in the past.

Notably in August 2021, when a Nigerian diplomat was mistreated by Indonesian border control officers, which triggered a diplomatic incident between the two countries… The announcements of the past few weeks have restored a calm climate and it seems that neither of these two are seriously willing to break this budding romance.