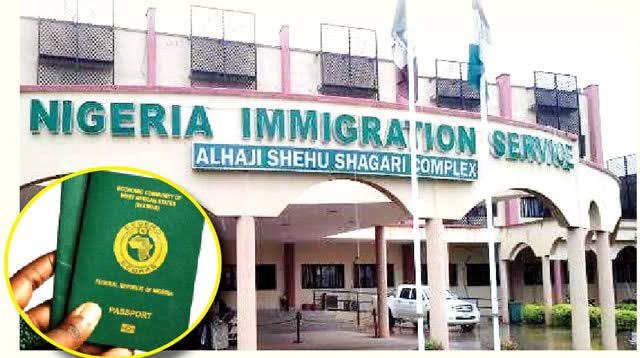 
Obtaining a passport in Nigeria has been marred by scarcity, racketeering and frivolous activities by some officials of the  Nigerian immigration Service (NIS) at its various offices Nationwide.

GLOBAL SENTINEL’s findings showed that despite automation of the Agency’s activities, passport applicants are made to ‘unofficially’ pay at least N45,000 to N100,000 by officials in order to fast track the waiting perio


In a visit to NIS headquarters in Abuja, our correspondent discovered that for easy processing of passport, an applicant requires the service of an ‘Agent’ being an official of the agency.


“What are you here for? If you came for passport processing and you don’t know anybody inside, you can’t do it by yourself, let me call someone to help you out,” he security man said as him beckoned on young man by name Chibuzor to take our correspondent inside the building.


Two other applicants joined our correspondent; a young boy in his mid twenties(Michael )and a woman with her two children about 10 to 15 years old. As they made their way through the gate, a female officer attempted to stop them but for Chibuzor’s intervention.

“Leave them they are with me” he said, so our correspondent and others  made it through the gate without registration and just as they were leaving the point of registration, the woman as though expecting share of a cake said to Chibuzor “make sure you see me later” while Chibuzor gave an assurance.


Chibuzor, disclosed to our correspondent who enquired to know how things are done, that the cost of acquiring a new  international passport within 6 weeks is N35,000 “but if you need it in two weeks time, it will cost N45,000.


Michael ( the other applicants)in a conversation with Global Sentinel disclosed his prior experience at the NIS.


Meanwhile, officer Chibuzor  directed our correspondent to send needed information to his personal WhatsApp, and informed his colleague via telephone that he had received a certain amount in his personal account.


Chibuzor led our correspondent and others  to an office where they were given forms to fill. After filling the form, they waited under a canopy where so many people were seated. While waiting Global  Sentinel stroke a conversation with another applicant who narrated his experience.

“I am here to collect my passport and it has taken quite a while. It took me over 6 weeks to get mine and that’s because I initiated the process online and I don’t know anyone here and nobody told me how things are done here, but those who have insiders helping them are lucky to get theirs earlier. Usually those who begin the process online without the help of an insider tend to wait for longer period,” he said

At this time, Officer Chibuzor was ready for the cash payment even though Our correspondent gave him the excuse of not having other documents needed for the application, he insisted that payment be made to him that very day.


“We need to initiate the process today so transfer the money to me or do you have cash to pay now, then I can take you for capturing? Just transfer N40,000” he said .


Money was transferred into his personal account and he confirmed the credit alert. In the same vein, Mrs chinenye was asked for some undisclosed amount of money which she paid to him in cash after asking her son to recount the money.

After the payment by the other applicants, he led them into the processing center where many other people were waiting to be captured. Officer chibuzor asked our correspondent to sit down while he submitted the foam in person.


The hall just like a waiting room was congested as applicants; both online and those with Agents sat waiting to hear their names been called. Our correspondent observed how people troop in, some being lead by their Agents (NIS Officials with or without Uniform)


“This officer here is helping me out she is my relative and I paid 40k for renewal but for new applicant like you, I heard if you want express, you will pay 100k and in a day or two your passport will be ready.. the amount you pay will determine how early you will get the passport, she advised me not to go through the online process as they are not prioritized” he said

“If we don’t have this passport they will use it against us but now see how much they are exploiting us. The exploitation here is already a norm. If you want to follow due process your passport will be delayed because they will prioritize those who made payment and even after the 6 weeks given they might come up with stories saying the passport booklet are not available” he lamented

NIS in denial despite glaring evidences

Amos Okpu, the service Public Relations Officer , in a call with GLOBAL SENTINEL, denied the knowledge of any of such malpractices in the offices. “Please reveal the names of the officials involved. No body is expected to enter our premises with cash and I don’t know about such practices” he said

Responding to the glaring malpractices and exploitation at the NIS offices, Makolo Daniel, former NIS officers and a lawyer, blamed the government whom he said are the Genesis of the problem.

“Passport is just a means of identifying yourself as a citizen of Nigeria yet it is now cost more than the minimum wage. This already is a malpractice from the side of the government. Why should Government who ought to provide warfare for her citizens, take this much from her just for a means of identification?”


The Nigerian government has short-changed her citizen. The government officials signed contract with shadow companies probably owned by themselves, today passport is produced in a different country, the security features in another country, the printing in another country before it’s brought back into the country. Meanwhile this technology can be bought or transferred to Nigeria but since it wouldn’t benefit them, they rather contract it out” he said


He argued that the new passport though with security features ought not to expensive as it is. “These security system can’t be compared to that of the ATM, yet the increment is outrageous.


According to him the NIS system needs a strong character who believes in the country and who has the mental, physical and intellectual capacity to drive the agency to the point where it realizes that it is a service oriented agency’s not a revenue yielding agency.


“They must come to the realization that their utmost duty is to provide services to Nigerian and foreigners to make life better for them.” He concluded

The impact, challenges and prospects of Nigeria’s National Development Plans