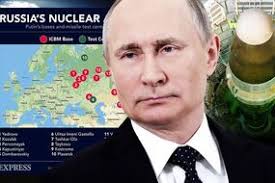 •How the West Can Make Sure Russia’s Threats Stay Hollow

Few if any wars have been launched with as much nuclear posturing as Russia’s invasion of Ukraine. One week before beginning its offensive, Moscow conducted previously planned exercises of its nuclear launch systems. A few days later, Russian President Vladimir Putin falsely accused Ukraine of building nuclear weapons. When starting the invasion, Putin warned that any outside country standing in Russia’s way would face “consequences such as they have never seen in their history”—a thinly disguised nuclear threat. Almost as soon as the fighting began, Russia’s military attacked and seized Ukrainian nuclear facilities while falsely claiming that Kyiv wants to build dirty bombs. And as Russian forces began to meet stiff resistance, Putin announced that Russia’s deterrence forces—which include its nuclear weapons—were shifting to “a special regime of combat duty.” It then ran another set of (possibly routine but still notable) launch drills.

Many analysts and observers have been frightened by Putin’s actions, and for good reason.  Whenever the leader of a nuclear-armed state signals a readiness to use nuclear weapons, it is worth taking seriously. That is especially true when the threats come from a man who controls the world’s largest nuclear stockpile and who is simultaneously conducting an unprovoked, full-scale military invasion of a neighboring country. Putin is powerful, belligerent, and evidently unconcerned about casualties.

But although the Kremlin has shown a willingness to kill civilians and wreak havoc, using nuclear weapons would deviate from Russia’s own nuclear doctrine. The country does not need them to defeat Kyiv, and even if it did, detonating weapons of mass destruction would provoke international retaliation, including, quite possibly, direct military involvement from NATO. This risks both massive conventional war and further nuclear escalation—an outcome that Putin does not want. Rather than seriously considering strikes, Putin is more likely using the specter of nuclear escalation as cover for increasingly brutal tactics on the ground and to pressure Kyiv into surrendering. He may also hope that by threatening attacks, he can scare NATO away from increasing its involvement in the conflict or even get the West to make Ukraine submit.

So far, this strategy has failed; Kyiv and its backers have held firm. But they have wisely avoided escalatory language and steps of their own. They should continue to do so, because although the risk of nuclear escalation may be low, it is real. Russia has a diverse arsenal of nuclear weapons, large and small, and both Russian and Western nuclear thinkers have discussed nuclear use as a way of demonstrating resolve and pressuring adversaries. The risk of nuclear war would grow particularly acute if NATO forces become more directly involved in the invasion, because from Russia’s perspective, a war with NATO would threaten its sovereignty and existence.

Western powers should keep assisting Ukraine with the aim of convincing Moscow to reverse course and reach a negotiated settlement with Kyiv, one that guarantees Ukraine’s security. But as Western states debate new weapon provisions and ways of engagement, they must be aware of the dangers and avoid mission creep. If NATO offers Ukraine increasingly direct help, the organization risks finding itself in a war against Russia despite every intention of avoiding it.

It is not easy to divine the meaning of Putin’s nuclear declarations. To keep the West on edge, the Russian president has been deliberately ambiguous, and despite the menacing tone, his statements are not explicitly or uniquely about nuclear weapons. As Russia defines them, its “deterrent forces” include its nuclear arsenal, but also its conventional long-range strike systems, some of which are already being used in Ukraine. Although it has not been used before, Putin’s phrase “a special regime of combat duty” does not appear to signal a serious change in Russia’s nuclear posture. When Russian Defense Minister Sergei Shoigu explained the details of the order, he said it entailed staffing up Russia’s nuclear strategic force command centers—all of which were already well staffed. The phrase, in other words, had little real meaning.

If Russia were to detonate nuclear weapons as part of the invasion, it would run counter to the state’s official doctrine and Vladimir Putin’s stated nuclear plans. In “Foundations of State Policy of the Russian Federation in the Field of Nuclear Deterrence,” the government stated that it will not use nuclear weapons unless the “very existence” of the Russian state is threatened or if Russia’s nuclear deterrent capacity—that is, its nuclear forces and command and control—is at risk. Putin has emphasized one specific scenario, indicating in spoken remarks that Russia would use nuclear weapons if under missile attack. But either way, even dramatic losses in Ukraine would fall short of meeting these thresholds.

Using nuclear weapons would serve no military purpose besides shock and horror.

Doctrines, of course, are subject to interpretation, and Putin and his advisers may view the serious sanctions levied against Russia and a bogged-down invasion as threats to the country’s existence, particularly as the costs build. Putin may also equate the Russian state with his own leadership, something that defeat in Ukraine and Western sanctions could threaten. And Putin has plenty of personal incentives to avoid losing office. Leading Western politicians are calling for Russian officials—including the president—to be overthrown and charged with war crimes in The Hague, and the International Criminal Court has opened an investigation into Russia’s conduct.

But right now, Putin faces no serious threats to his power, and Russia is not losing on the battlefield. Despite substantial Ukrainian resistance, the Russian military continues its slow advance on Ukraine’s major cities. It retains tremendous conventional combat power, which it can use to destroy both military and civilian targets. As the conflict currently stands, the use of nuclear weapons would serve no military purpose besides shock and horror, which Russia has other ways to inflict. This means that the current nuclear posturing is almost certainly meant to deter direct Western involvement in the fight—including to defend Ukraine’s airspace by enforcing a no-fly zone—or to compel Kyiv into making concessions at the negotiating table.

If Russia were facing defeat, a nuclear strike could force Ukraine to concede. But it is unlikely that this would ultimately protect Russia or help Putin and his allies stay in power. Instead, the radioactive fallout from the attack would spread for hundreds of miles, if not more, including to Russia itself and NATO countries. The former could risk Putin’s domestic position; mass poisoning one’s population is generally not a recipe for political success. The latter, meanwhile, may well be seen as an assault on NATO, triggering its conventional involvement in the conflict, the very thing Russia wants to deter. (The Russian government is aware it would lose a war with NATO.)

But low risk is not the same as no risk, and many Western analysts believe that the Kremlin is more willing to use nuclear weapons than it publicly suggests. The country has an arsenal of roughly 2,000 nonstrategic nuclear weapons: smaller, lower-yield warheads that nonetheless approach or exceed the blast power of the bombs dropped on Hiroshima and Nagasaki. These weapons seem to have little purpose in a purely responsive doctrine and appear designed for wartime use.

Instead of mere protection, these analysts—including in the United States government—believe Russian nuclear doctrine calls for a more aggressive tactic that they term, alternately, “escalating to de-escalate” and “escalating to win.” They believe that if Russia is faced with the prospect of losing a conventional war, it would detonate a nuclear weapon in order to demonstrate resolve and force adversaries to back down.

This is unlikely to be Moscow’s actual nuclear strategy. Instead, if Russia uses nuclear weapons to signal resolve, it will be because it indeed sees an existential threat—not to win a smaller conventional conflict which it would otherwise lose. It is difficult to imagine such a threat coming from Ukraine itself. But Russian nuclear use would become far more plausible if Moscow feels that direct NATO military involvement is inevitable. The Kremlin believes that in a war between NATO and Russia, the West would inevitably target Russian leadership and preemptively strike its nuclear capabilities. This, of course, would meet all the criteria in Russia’s nuclear use doctrine, perhaps leading Moscow to launch the first bomb.

The West must be careful in how it handles the ongoing invasion.

In the event of such a conflict, the West could try to persuade the Kremlin that it had limited aims. But doing so would be extraordinarily difficult through the fog of war. Even in the absence of active conflict between the alliance and Moscow, Putin sees NATO with tremendous hostility. He has condemned the organization for arming Ukraine, compared the West’s financial sanctions to an “act of war,” and declared that he would consider any country that lets Ukrainian planes land on its territory “a party to the conflict.” These statements, like his general nuclear threats, are designed to deter, but they also reflect his genuine views. Combined with Russia’s nuclear doctrine and the Kremlin’s hostile posture, these statements underscore the importance of avoiding a direct conflict between NATO and Russia.

That means the West must be careful in how it handles the ongoing invasion. Member states should continue to supply Ukraine as it defends itself, but NATO should not institute a “no-fly zone” over Ukraine, which would entail using Western airpower or the threat thereof to stop Russian aircraft from flying in Ukrainian airspace, potentially bringing NATO and Russian forces into direct military combat. They should slow plans to supply equipment such as fighter jets, which could require the use of their own airfields. They should promise to ease old and new sanctions if Russia de-escalates and withdraws its forces.

Such caution and concessions may not bring emotional satisfaction; there is certainly a visceral appeal to proposals that would have NATO forces directly help Ukraine. But these would dramatically heighten the risk that the war becomes a wider, potentially nuclear conflict. Western leaders should therefore reject them out of hand. Literally nothing else could be more dangerous.

OLGA OLIKER is Director of the Europe and Central Asia Program at the International Crisis Group.

One thought on “Putin’s nuclear bluff”