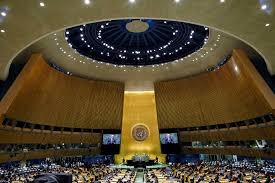 Russia’s invasion of Ukraine, and the reaction it has drawn from the United States and the European Union, has been described by many observers as having “revitalized the liberal international order,” as Kori Schake of the Washington-based American Enterprise Institute wrote in The Atlantic. Ivo Daalder, the president of the Chicago Council on Global Affairs and a former U.S. ambassador to NATO, tweeted that “the West isn’t weak, divided or declining after all.”

Other commentators have drawn similar conclusions following the stronger-than-expected response on both sides of the Atlantic to Russia’s incursion into Ukraine. But many observers outside the core countries of the international system, Africans included, have little enthusiasm for the West’s desire to involve them in a conflict they regard as peripheral to their concerns. Nor do they have much sympathy for a world order that has historically relegated Africa to a marginal place within the international system and imposed considerable costs on its nations, while demanding their unflinching loyalty toward its stated aims.

This U.S.-led order, its proponents argue, has brought unprecedented stability, peace and prosperity to the world since 1945, despite threats posed by adversaries like the Soviet Union and later Russia, and more recently China. An unintended consequence of Putin’s march into Ukraine, they argue, is the reinvigoration of what is often described as a rules-based system that enshrines norms like multilateralism, and is shored up by alliances like NATO and institutions like the United Nations and the EU. But this order has been regarded by many in the Global South, including Africa, as a framework that reflects and advances the interests and preferences of a narrow group of nations—most prominently the U.S. and its European allies, and more recently the rich, industrialized countries of Asia.

Put another way, many in Africa and the rest of the Global South do not regard—and never have regarded—the liberal international order as particularly liberal or international. Nor do they consider it to be particularly orderly, considering how much their countries were turned into spheres of influence and arenas for geostrategic competition—largely by Washington and its allies, but also by the Soviet Union —beginning roughly around the same time many of them won independence from European colonial rule. Notwithstanding the end of the Cold War, the transition to multiparty democracy and the rise of globalization, this narrative has not shifted in the Global South and remains the dominant one.

Much of this historical aversion to the exclusionary nature of international politics and the key institutions that govern it has been on display during the Ukraine war, and even in its buildup. A major talking point to emerge from last week’s U.N. General Assembly resolution condemning Russia’s invasion of Ukraine was the fact that 17 of the 35 member states that abstained from voting were African, with many observers tracing their abstentions to Russia’s influence in the arms export sector and the Soviet Union’s historical support for African anti-colonial and liberation movements in the 20th century.

Although there is little hard evidence at this time to explain why African countries voted the way they did, a simpler explanation might be found in their historical positions on international issues as well as their stated positions throughout this ongoing conflict. For instance, South Africa, one of the 17 African countries that abstained, based its vote on principles of de-escalation and multilateralism, in a nod to longstanding national and continental positions on the settlement of disputes by mediation as well as the principle of non-alignment embedded in the charter of the African Union’s precursor institution, the Organization of African Unity.

Those explanations, however, did little to shield Pretoria from criticism, generally from Western commentators, that it had given short shrift to moral concerns and Ukraine’s territorial integrity, with some invoking the country’s fight against apartheid as part of their criticism. But South Africa’s position was hardly an anomaly—India hedged its position on the vote for similar reasons of non-alignment, while Brazil, Mexico, Pakistan, Bangladesh, Sri Lanka and China all abstained for reasons of their own.

And while the motion to condemn Russia was carried by an overwhelming majority in terms of votes cast, it looks decidedly different when weighted by population. The governments that abstained represent roughly 51 percent of the world’s population. And only 42 percent of the roughly 7.7 billion people represented by governments that took part in the vote live in countries that approved the motion.

Meanwhile, the number of countries that have joined Western sanctions against Russia is dwarfed by the number that have not. But this has not stopped Western governments and analysts from continuing to chide countries in Africa and the Global South for hedging their positions according to their interests, while imploring them to unequivocally back a tougher line against Russia. In a press briefing with journalists from across the continent, U.S. Assistant Secretary of State for African Affairs Molly Phee evaded questions about why African countries were being compelled to back Washington in a dispute they believe they have little to do with.

For African countries that have regularly abstained from votes in the U.N. on highly charged issues between great powers, the swift move to isolate Russia economically and diplomatically is an ominous reminder of a hegemonic order that continues to impose itself on them—and in which they often suffer similar treatment. According to the U.S. Treasury Department’s sanctions list, governments and individuals from Africa form the largest geographic group currently under U.S. sanctions, including Zimbabwe, on which Washington recently extended its ongoing sanctions by a year, a month after the EU did the same. African countries still find their relationship with China—the continent’s largest trade partner—under the West’s scrutinous, patronizing eye, and those countries certainly have not forgotten about the vaccine nationalism and discriminatory travel bans they have been subjected to by the U.S. and Europe amid the ongoing coronavirus pandemic.

But perhaps most importantly, African countries desire to broaden their economic, diplomatic and security relations beyond traditional Western powers, and bristle at the notion that they must sacrifice their interests on the altar of geopolitical competition. It remains to be seen how effectively African countries can continue to strike this balance and for how long, but for most of them, the old adage rings true: When two elephants fight, it is the grass that suffers.

So while they will continue to support multilateral efforts to bring an end to war—in Ukraine but also elsewhere, including in Africa—most of them do not feel much enthusiasm for the Western-led international order and will continue to work toward a more inclusive, multipolar one in which they can play a role commensurate with their aspirations.