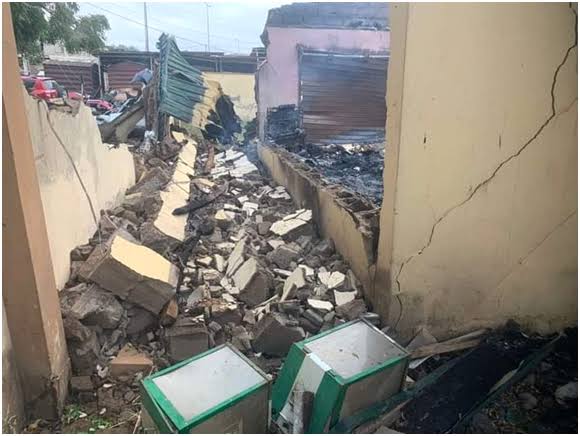 Concerns are mounting over the ability of Nigeria to deliver a peaceful, fair and credible 2023 general elections owing to incessant attacks on offices and officials of the country’s electoral umpire- the Independent National Electoral Commission (INEC), and destruction of critical election materials.

These attacks, including activities of non-state actors are already heightening fears, anxiety, and tension, which may spark significant voter apathy, and disenfranchisement of citizens according to reports, and views of political and security analysts.

Since 2020, there have been over 50 attacks on INEC facilities and officials in the country. This was amplified on Thursday, November 10, when two offices of the Independent National Electoral Commission (INEC) were attacked and set ablaze in Ogun and Osun States by suspected hoodlums. The suspected hoodlums had in the early hours of that Thursday, set INEC offices at Iyana Mortuary, Abeokuta, the Ogun State capital on fire; while its Ede South Local Government Area office in Osun State was also attacked and some portions burnt by the hoodlums.

This sparked outrage and fresh concerns over the 2023 general elections. The Commission described the situation as disturbing. Festus Okoye, INEC’s commission for information and voter education, said over 65,000 uncollected PVCs were destroyed in the fire.

The southeast is the hardest hit which is allegedly fuelled by non-state actors in a bid to stop elections from holding in the region.

An SBM intelligence report revealed that Nigeria’s South East and South South regions are the hardest hit.  SBM is a leading geopolitical research consultancy.  It notes that the attacks which first focused on police and correctional facilities have been expanded to include electoral facilities. The SBM report also warned that turnout could further be depressed, particularly in regions where the legitimacy of the state is seriously being questioned in the eyes of the people.

One of the latest was the attack on the Commission’s office in Igbo Eze North Local Government Area of Enugu State on July 3 which led to the destruction of 748 ballot Boxes and 240 voting cubicles. On April 14, 2022, the Commission suspended the Continuous Voter Registration (CVR) Exercise in the Ihite-Uboma Local Government Area of Imo State, following the murder of its staff.

The suspension stirred so much concern that citizens who are willing to participate in the elections may be disenfranchised for being unable to register. Festus Odoh, a public affairs analyst in an interview with Global Sentinel described the attacks as worrisome and a direct attack on democracy while noting that thousands of citizens did not get the opportunity to partake in the CVR process.

Odoh also expressed concerns that the repeated attacks in the southeast region may signal a deliberate attempt to ensure that the election is not fair, credible, or peaceful. He also added that the failure of the Nigerian government to identify or arrest the culprits means that INEC offices are still at high risk of further attacks or could result in disruption of the election process.

An analytical report published by NexTier SPD, a peace, security, and development firm, warns that there is a likelihood that such attacks may increase in number and intensity.

The NexTier SPD report titled ‘PolicyWeekly’ equally argued that the attacks would further translate to the disenfranchisement of throngs of qualified and willing voters in the state who have been making efforts to be enlisted in the voters’ register so they could participate in the forthcoming elections.

“If this group of citizens did not support exercising their civic voting right, the criminals behind the activities would have achieved a major victory in undermining the credibility of the elections. The disenfranchisement of willing voters is a pre-election category of vote rigging or even disruption,” the report read.

In addition to attacks on INEC facilities and officials, the prevailing insecurity in the form of political violence and activities of non-state actors poses a major threat to the much-awaited 2023 polls. Nigerians are worried about insecurity, this is mostly because despite the assurances of security forces in Nigeria, political violence that has claimed thousands of lives has continued unabated.

According to a report titled the ‘Nigeria Election Violence Tracker’, there were at least 3,000 violent incidents across the country within 10 months alone (from January to October 2022). No fewer than 8,350 persons were killed in these violent attacks.

The report was published by the Centre for Democracy and Development (CDD) partnership with the Armed Conflict Location & Event Data Project (ACLED). It looks at a general summary, political and security developments and a look at the various zones.

The report further revealed that half of Nigeria’s states experienced an increase in the number of conflict events within the same period compared to the same period in 2021.

In addition to political violence, all regions in the country are confronted with rampant insecurity from the age-long terrorism in the Northeast to banditry in the Northwest, activities of unknown gunmen, and civil unrest in the South.

Additionally, the report projects that as campaigning for national and state elections ramps up, large rallies could heighten the existing security challenges and exacerbate partisan and factional tensions.  It adds that aspiring politicians could also sponsor violence.

“Taken together, ongoing instability across Nigeria is therefore likely to affect the conduct of the upcoming elections,” the report read.

“The coming 2023 elections will involve candidates and political parties campaigning for 1,488 positions. The president and 17 of the country’s 36 state governors are term-limited, which will result in a significant turnover in leadership. As expected, all 18 parties are intensifying efforts to gain electoral power and utilizing all the tools at their disposal. There are concerns that candidates’ incendiary rhetoric could empower armed groups with links to the parties to wage violence against opponents,” it further read.

But the report notes concern over the ability of INEC to conduct elections in areas engulfed in insecurity.

Also commenting on the matter, Prince Chinedu Obi, National Publicity Secretary of the National Rescue Movement (NRM), expressed concerns that the “unfortunate scenario” has created a psychological torture and trauma to residents and visitors alike, which is also heightened by attacks on prominent politicians in recent times. This, according to him, sends a signal of an unsafe socio-political environment.

“In this circumstance and naturally too, such sad developments will definitely promote apathy as well as affect the participation of persons in the upcoming election,” he said.

Obi, however, expressed optimism that the 2023 election also provides an opportunity for Nigerians, who have lost faith in current leadership to redress their regrets. “I foresee a push factor that will attempt to strike a balance between the fear of attack and the urge to reclaim the nation from the present sorry state of governance, which will motivate many to participate in the elections”, he said, explaining that “A careful study of recent consciousness and sensitization as well as mobilization of Nigerians, especially the younger ones around obtaining their permanent voters cards speaks to this fact.”

According to him, another push factor that will likely improve participation of persons in the 2023 election is the success recorded with the electoral reforms, provided by the 2022 electoral Act, which has raised hope of a credible and improved electoral process in the nation’s election.

He said the new electoral Act on the face value provides a psychological boost for an improved election in 2023, judging by the recent off-season elections in Edo, Ondo, Anambra and the most recent Osun State election, where electronic transmission of results was implemented and which presented an improved transparent and credible outcome.

“And more so, as INEC has assured Nigerians that the highly rated Bimodal Verification System (BIVAS) will be deployed in the accreditation of voters during the 2023 elections,” he enthused.

Ezenwa Nwagwu, Chairman of Partners for Electoral Reform and board member of YIAGA, speaking with Global Sentinel also decried the incessant attacks, which he noted is partly being done to cause fear among citizens. He expressed concern that INEC Is not doing enough to secure its offices.

He therefore stressed the need to continue to inspire confidence in citizens and the democratic process.

Nwagwu also tasked INEC with the reasons for the attacks and beefed-up security in its facilities. According to him, the most vulnerable points are the local government offices because there is hardly anybody present except when there is an election or voter registration.

“So, we need to increase security around those LGAs, and we should invest in intelligence, non-human security such as CCTVs, these things are not being done,” he said.

“We should also demand security delivery from security officers who are mandated to secure those buildings because often, the people who commit arson or torch the buildings do so without a single resistance, that for me is the challenge,” he further said.

Attacks may inflate the election cost amid fiscal deficit

Both NexTier and SBM reports project that the attacks could have huge financial implications and raise Nigeria’s cost of the election, which is already high, to a further unreasonable level. At the moment, INEC’s annual budget is ₦40 billion. Besides this annual budget, the electoral body has submitted a budget of ₦305 billion for the conduct of the 2023 general elections to the National Assembly. This amount is exclusive of the ₦40 billion annual budget.

It is also noteworthy that the budget did not anticipate losses to targeted attacks, and funds would be needed to replace items lost to the arson.

To mitigate the impact of these attacks and prevent further occurrences, INEC charged INEC to reorganize security around its facilities and consider the increasing use of technology to secure its structures and equipment; reorganize security in their places of operation.

The report also tasked the government to support the security agencies to find out, arrest, and punish the culprits behind the attacks and restore confidence in the citizens.

Also, the unexpected rise in cost has been worsened by the recent flooding across the country that destroyed about 21 INEC offices including the voting materials.

Below is a timeline of attacks on INEC facilities in the last three years.

2022 attacks at the INEC offices

Speaking on these attacks, the INEC Boss, Mahmood disclosed that the Commission has far tracked 50 incidents of physical attacks at political campaigns, across 21 states of the federation and the Federal Capital Territory in the last month.

On October 17, there was also an attack on PDP supporters during a presidential campaign rally. Many people sustained injuries.

On 23rd October, a campaign train of the candidates of the Lagos Peoples Democratic Party, PDP which included its governorship candidate Dr. Olajide Adediran (Jandor) and his running mate, Funke Akindele was attacked by some hoodlums.

On November 9th, the campaign train of the Presidential candidate of the People’s Democratic Party (PDP), Alhaji Atiku Abubakar, in Maiduguri, Borno state.

The same can also be said to be the case of the presidential candidate of the Labour Party (LP), Peter Obi, who has on more than one occasion had to condemn physical attacks on his supporters, especially in Nasarawa State and Lagos states that led to serious bodily harm to them.  In the same vein, the LP recently also warned the All-Progressives Congress (APC) to caution its vice-presidential candidate, Sen. Kassim Shettima, to refrain from attacking Peter Obi and other presidential candidates in the forthcoming general elections.

The director-general of the Labour Party Presidential Organisation, Dr. Doyin Okupe, in a statement on Saturday, November 12, 2022, said Shettima’s unguarded utterances violate the codes of the national peace accord signed by all political parties