The war in Ukraine, explained in maps 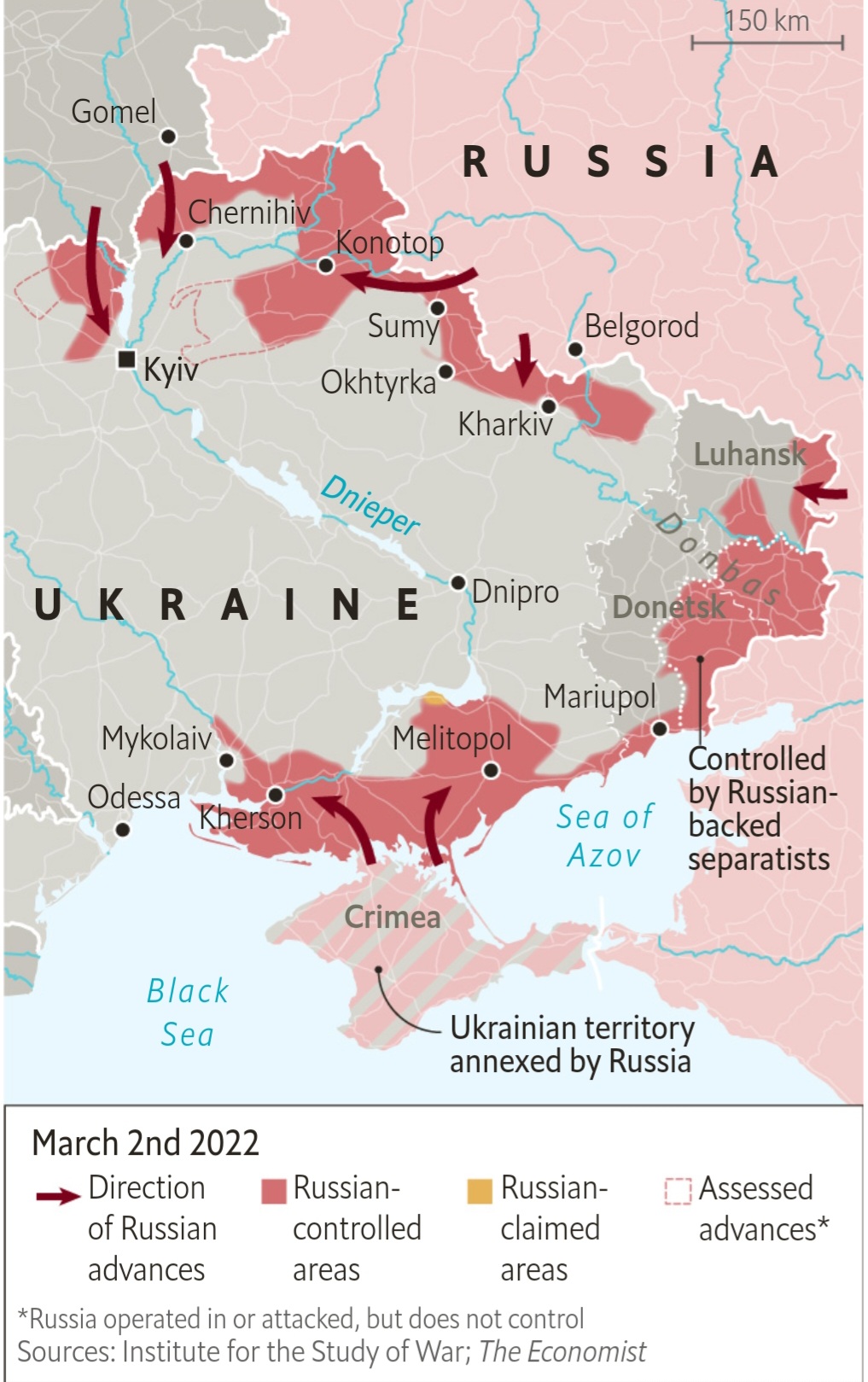 Kyiv, ukraine’s capital, has so far held off Russian forces. But a vast column of armoured vehicles, stretched out over 40 miles (65km) and closing in from the north-west, suggests things are about to get much worse. Russian troops will probably encircle Kyiv within days.

Kharkiv, Ukraine’s second city, has also faced heavy shelling, having earlier repulsed a Russian attack. And on March 2nd Kherson, in the south, became the first regional capital and by far the largest town that Russian forces have taken and held. Meanwhile in the south, Russia is seizing smaller towns along Ukraine’s southern coast. Berdyansk and Melitopol are in Russian hands. The map above shows the reported areas of Russian control and Russian advances. Ukrainian authorities said on March 2nd that more than 2,000 civilians have been killed since war broke out on February 24th.

The military build-up around Ukraine is the biggest concentration of firepower in Europe since the cold war. Before the invasion, Russia massed an estimated 190,000 troops near the border. And the West has been increasing troop numbers too. America has rushed to reinforce eastern Europe with thousands of troops and dozens of warplanes. The NATO Response Force, a 40,000-strong unit built around a high-readiness land brigade that can be put into the field in two to three days, has been activated for the first time in its history. And on February 22nd Volodymyr Zelensky, Ukraine’s president, called up the country’s 200,000 reserves. Two days later he ordered a “general mobilisation” of men in the country into the armed forces, and men aged between 18 and 60 were banned from leaving the country.

In an effort to keep the West from intervening in the war, Vladimir Putin, Russia’s president, has raised the nuclear stakes. On February 27th he ordered his nuclear forces to be put on “special” alert. Mr Putin said this was in response to “aggressive statements” from NATO countries. The American government called the move “yet another escalatory and totally unnecessary step.” Russia is estimated to have 1,588 deployed nuclear warheads and 2,889 in reserve (America has 1,644 and 1,964 respectively). The map above shows the approximate ranges of Russia’s missiles. But Mr Putin’s order does not mean he is preparing a nuclear strike. “Announcing it means that it is primarily a political message designed to impress us,” says Bruno Tertrais, an expert on nuclear deterrence at the Foundation for Strategic Research, a think-tank in Paris. “If he was getting ready to use nuclear weapons he would not [say so first].”

Despite Mr Putin’s railing against the West’s “empire of lies”, plenty in Russia see his war for what it is: a conflict entirely of his own making. To assess the geographical extent of this opposition, The Economist constructed a dataset of 51,773 unique posts from Twitter and Instagram that used the hashtag “#нетвойне”, Russian for “no war”. Of these we were able to identify the geographic location of 7,120, of which 3,495 were marked as posted from within Russia. We found anti-war posts coming from Russia’s 50 largest cities, across all 11 time zones and in 83 out of 85 federal subjects (ie, regions, such as oblasts and republics). This map gives some indication of the disapproval of Mr Putin’s war at home, but it is impossible to illustrate its full extent. The Russian authorities have responded by tightening their grip on the internet, and fear of reprisals no doubt leads to some self-censorship.