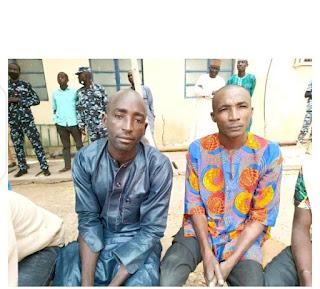 •Say they are using new tactics

A credible source said, these two suspected terrorists are wanted in connection with the attack & abduction of three children of Bala Hussaini, of Faskari LGA, on Aug 5,2021.

The Katsina Police Command on Friday raised the alarm that terrorists operating in the state were now using vehicles for operation as against their former style of using motorcycles.

The command’s spokesman, Gambo Isah, raised the alarm while parading no fewer than 13 suspects who were recently arrested majorly for terrorism-related offences.

The spokesman revealed that the command’s operatives early Thursday morning had a fierce gun duel with terrorists at Kuru and Dangani villages in Matazu Local Government Area, during which five terrorists were killed.

He said the terrorists had around 1am of the same day attacked the two villages where they rustled 81 cows, 54 sheep and one donkey.

Isah added the operatives later recovered all the rustled animals and rescued Sule.

The recovered vehicle was displayed during the parade of the suspects at the Katsina police headquarters on Friday.

Isah declare, “From our recent encounters with terrorists, we discovered that they (the terrorists) have changed their modus operandi. They now use vehicles to attack instead of motorcycles which they used to operate with.

“Apart from the Golf car, we recovered from them during yesterday’s (Thursday) operation, the terrorists also used a J5 and Sharan vehicles in the last Wednesday operation in Jibiya where we lost our gallant DPO for the area. We are however ready for them, notwithstanding any strategy they come up with.”

Suspects paraded on Friday included those alleged to have been involved in terrorism, kidnapping, theft of vehicles and vandalisation of government property.