Skip to content
EUROPE NEWS RUSSIA AND EUROASIA US AND CANADA 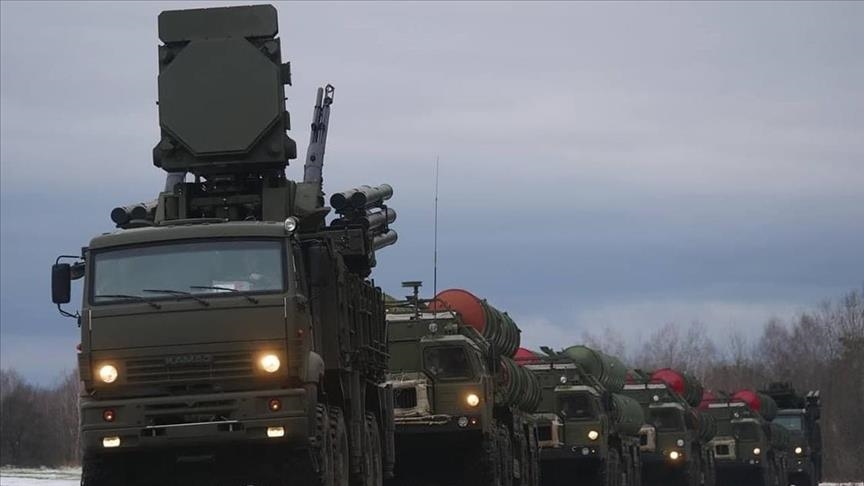 •Putin says Russia does not want war with Ukraine

•US has not verified Russian troop pullout near Ukraine-Biden

•US president reiterates Washington ready to engage in diplomacy with Russia

By Elena Teslova and Servet Gunerigok

Russia does not want a war with Ukraine and that is why it had put forward proposals on security guarantees, President Vladimir Putin said on Tuesday.

Speaking at a news conference in Moscow, following a meeting with German chancellor Olaf Scholz, Putin said Russia’s security proposals suggest signing an agreement with the US and NATO on ensuring equal security for everyone in Europe, including Russia.

According to him, the US and NATO ignored Russia’s three major concerns regarding NATO’s non-expansion eastward, return of the alliance’s military infrastructure to the state it was in 1997, and ban for the deployment of strike weapons near the country’s border, while agreeing to discuss some secondary issues, including military transparency and shorter- and intermediate-range missiles deployment.

“We intend and will strive to negotiate with our partners on the issues that we have raised in order to resolve them diplomatically,” he said.

Putin said he discussed the security guarantees proposals with Scholz, and told him that Russia cannot turn a blind eye to how the US and NATO “misinterpret” the principle of indivisible security.

He said that the US and NATO are trying to put into practice a “forced containment” against Russia, describing it as a threat to the country’s security.

Speaking about the situation in Ukraine, Putin said Russia had been listening to the promises about NATO’s non-expansion eastward for 30 years, and now the neighboring country, Ukraine, plans to join the alliance.

“The issue of Ukraine’s admission to NATO is being discussed (by Western countries). It is said it (admission) won’t happen tomorrow. Then when? The day after tomorrow? What does it change for us?

“We hear that Ukraine is not ready today to join NATO. And also, that tomorrow it won’t be accepted. Will it be accepted when it is prepared?” he questioned.

Putin stressed that he would like to make clear the fate of Ukraine’s admission to NATO at the negotiation process “through peaceful means,” expressing hope “the partners will hear” Russia’s worries and will take them seriously.

For his part, Scholz said Russia and the West’s positions regarding security are different, and that NATO and the EU do not agree with Russia’s security proposals but there are points that can be discussed, and it is important to maintain the dialogue.

He then stressed that there are no plans for NATO’s expansion. “This is not on the agenda.”

“European security cannot be against Russia only with it,” the chancellor said.

Speaking about the possibility of a war between Russia and Ukraine, Scholz said a war in Europe is “unimaginable,” pointing out diplomatic possibilities for the settlement of the Ukrainian crisis are not exhausted.

Putin opposed him, saying there was a war in Europe, in Yugoslavia, “unleashed by the US and NATO,” but Scholz argued that the situation was different there, there was a threat of genocide.

To that Putin said what is happening right now in the east of Ukraine, “discrimination of the Russian-speaking population of Ukraine, cemented in the country’s legislation” is “genocide” for Russia.

Nevertheless, Scholz welcomed the Russian Defense Ministry statement about the return of some of the Russian troops to places of permanent deployment as “a good sign.”

The chancellor provided some details of his meeting with Ukrainian President Volodymyr Zelensky held on Monday. Scholz said Zelensky “firmly promised” to prepare a draft bill about Donbas special status and amendments to the constitution.

Scholz added that he suggested Zelensky to give authority to his representative in the contact group on the Ukrainian settlement to discuss the legislation with other sides.

Commenting on the appeal by the Russian lawmakers to recognize Ukraine’s breakaway regions of Donetsk and Luhansk as independent states, Putin said the crisis must be resolved in line with the Minsk Agreement.

Scholz also said that all sides have to remain committed to the implementation of the Minsk Protocol.

He also said the recognition of Donetsk and Luhansk as independent states will be “a political catastrophe,” and a violation of the Minsk Agreement.

Putin and Scholz said they spoke about the broadcasting of Russia’s RT DE TV channel in Germany and German Deutsche Welle in Russia, with the German chancellor noting that RT has to submit a relevant application as it is prescribed by the legal procedures.

Speaking about the talks in general, Putin said they were held “in the business-like atmosphere,” and that the sides discussed all issues “substantively and thoroughly.”

Putin once again said Nord Stream 2 is a commercial project and that it does not have a political side, the gas deliveries via this gas pipeline will start as soon as the German regulator allows it.

Scholz, for his part, said: “We are committed to ensuring gas transit in Europe works through Ukraine, Belarus, Poland and Nord Stream 1 according to the agreements we have.”

“We want a peaceful development of the situation in Europe, we want to avoid a war conflict in Ukraine. If it comes to it (to the military conflict), it will have large-scale consequences, it is clear to everyone,” he said, referring to possible Western sanctions on Russia.

The Russian president pledged that Russia will continue gas deliveries through Ukraine if there is demand in this direction, and also if it is profitable and if the infrastructure is well-maintained.

Troops pull back not yet verified

President Joe Biden said Tuesday that the US has not yet verified that some Russian troops are leaving positions near Ukraine.

Biden reiterated that Washington is ready to engage in diplomacy with Russia during a White House news conference to provide an update on the crisis involving Russia and Ukraine.

“And we are ready to respond decisively to a Russian attack on Ukraine, which is still very much a possibility,” he said. “We should give the diplomacy every chance to succeed.”

He said the Russian defense minister reported earlier Tuesday that some military units are leaving their positions near Ukraine.

He also said if Russia attacks Ukraine it would be a “war of choice” or a “war without cause or reason.”

“I say these things not to provoke but to speak the truth. If Russia does invade the days and weeks ahead, human costs for Ukraine will be immense,” said Biden.

“If Russia attacks Ukraine, it will be met with overwhelming international condemnation. The world will not forget if Russia chose needless death and destruction. Invading Ukraine will prove to be a self-inflicted wound,” he added.

Biden to Putin: Step back from the brink of war with Ukraine

By Trevor Hunnicutt and Steve Holland

The US President Joe Biden made an impassioned appeal to Russian President Vladimir Putin to step back from war with Ukraine on Tuesday, speaking starkly of the “needless death and destruction” Moscow could cause and international outrage Putin would face.

In a nationally televised speech, Biden said the United States estimates that 150,000 Russian troops now encircle Ukraine, a higher number than previous estimates of about 100,000. He said reports that some forces had withdrawn were welcome, but they were unverified and an invasion remained very much a possibility.

Biden said diplomacy remains a live option to wind down the crisis and urged Russia to engage. If Russia invades Ukraine, the United States and its allies are prepared to respond with penalties aimed at exacting economic pain and global isolation, he said.

“The United States is prepared no matter what happens,” he said.

Much of Biden’s remarks were aimed squarely at Putin, who has demanded that NATO not accept Ukraine as a member and stop any further eastward expansion. Biden’s threats of repercussions for Russia have yet to persuade Putin to back down.

“The United States and NATO are not a threat to Russia. Ukraine is not threatening Russia. Neither the U.S. nor NATO have missiles in Ukraine. We do not, do not have plans to put them there as well. We are not targeting the people of Russia. We do not seek to destabilize Russia,” said Biden.

“To the citizens of Russia: you are not our enemy, and I don’t believe you want a bloody, destructive war against Ukraine,” Biden said.

The human and strategic costs would be “immense” for Russia if it attacks, he said. “The world would not forget that Russia chose needless death and destruction,” Biden said.

The president said the United States is “not seeking direct confrontation with Russia” and that American soldiers were not going to fight in Ukraine. But, he said if Russia were to attack Americans in Ukraine, “we will respond forcefully.”

He warned that a Russian invasion would cause “consequences here at home,” including energy costs.

The speech came on a day that Ukraine said it had been hit by a cyberattack and appeared to blame Russia. read more

Biden issued a warning for Russia not to engage in cyberattacks.

“If Russia attacks the United States or our allies through asymmetric means like disruptive cyberattacks against our companies or critical infrastructure, we’re prepared to respond,” he said.

Biden spoke to Putin on Saturday and with Ukraine President Volodomyr Zelenskiy on Sunday, and has warned repeatedly of steep costs for Moscow, including sanctions against Russian businesses and oligarchs.But he has laid out a road map for a peaceful resolution, including talks on missile deployments and military exercises to try to reduce tensions in the region.

In his speech, Biden said the United States and its NATO allies are prepared for whatever happens.

“We are ready to respond decisively to a Russian attack on Ukraine, which remains very much a possibility,” Biden said.

Reports that Russia had withdrawn some military units “would be good but we have not yet verified that,” he said.

“Indeed, our analysts indicate that they remain very much in a threatening position,” he said, citing “more than 150,000 troops encircling Ukraine and Belarus and along Ukraine’s border.”