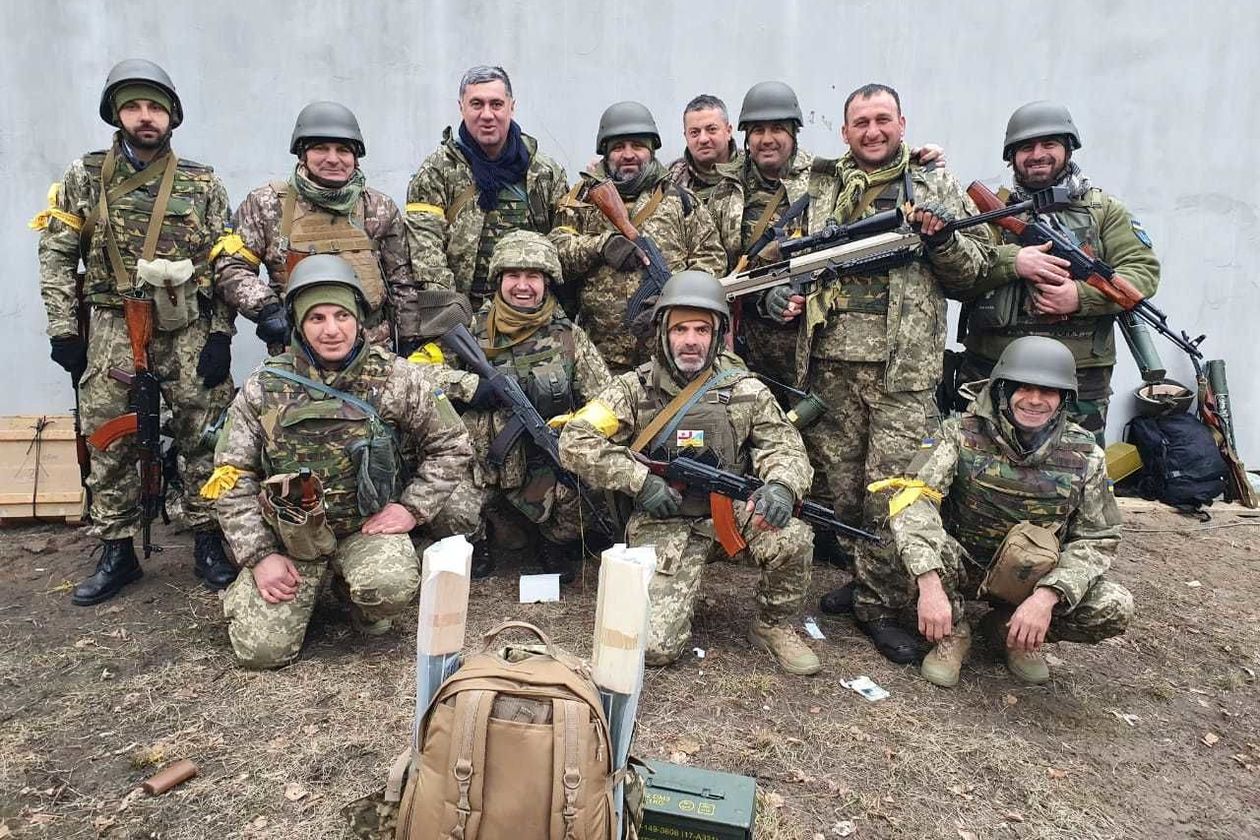 Irakli Okruashvili, a former defense minister of Georgia, last week joined a Ukrainian foreign-fighter regiment created to face down the Russian invasion in a hurry. Three days later, he and a group of countrymen, former special-forces soldiers, made contact with Russian troops north of Kyiv.

A combination of international arms and foreign volunteers has joined Ukraine’s efforts to impede the Russian advance in the third week of the conflict, and are now playing a growing role as the fighting spreads.

“We already passed this way in 2008 when we had a war with Russia,” Mr. Okruashvili said, referring to Moscow’s invasion of Georgia that year. “Ukraine is not fighting only for its own freedom, its own sovereignty, its own independence. This is not the war of Ukraine only.”

Former Georgian Defense Minister Irakli Okruashvili, third from left in the back row, with other former special forces soldiers from Georgia.PHOTO: IRAKLI OKRUASHVILI

Kyiv is welcoming all outside assistance. The forces at its disposal are far smaller than those of Russia and are unable to fight on an equal footing. Russia’s armed forces count 900,000 personnel, compared with Ukraine’s 209,000 active troops, according to the International Institute for Strategic Studies, a London think tank. The Ukrainian number doesn’t include recent mobilizations.

Addressing this imbalance, Ukrainian President Volodymyr Zelensky last month announced the formation of the International Legion of Defense of Ukraine, appealing to veteran soldiers outside the country who have specialized skills and experience in war to join the fight.

The international units are a component of the country’s regular armed forces and report to its general staff. Foreigners serve under Ukrainian officers. A spokesman for the group confirmed that some foreign units were already fighting on the front line.

Russia said it would consider these foreign fighters mercenaries. If captured, a Russian Defense Ministry spokesman said, they wouldn’t “enjoy the status of prisoners of war” under the Geneva Conventions.

President Volodymyr Zelensky has been appealing to veteran soldiers outside Ukraine to join the fight in the country.PHOTO: UKRINFORMUKRINFORM/ZUMA PRESS

The U.S., like many other countries, discourages its citizens from going to fight in Ukraine, as that could have legal and security ramifications. U.K. Foreign Secretary Liz Truss this week withdrew her support for British nationals going to Ukraine to fight after earlier saying she would back them if they wanted to join the struggle. Canadian Foreign Minister Mélanie Joly has said her government understood that people of Ukrainian descent would want to help defend their motherland and that doing so would be up to them.

Kyiv said 20,000 foreigners had enlisted in the International Legion and that there were nearly 13 million visits to the group’s website in its first 24 hours. The Wall Street Journal couldn’t independently verify these figures.

The group is seeking veterans with combat experience, and a number of Americans and British citizens who have served in Iraq and Afghanistan have already registered, the spokesman said.https://d789c5eb7cd3c060b4b84949a1bb426d.safeframe.googlesyndication.com/safeframe/1-0-38/html/container.html

Ukrainian diplomatic missions abroad have been funneling recruits via Poland, and volunteers have been arriving there from Belarus, Belgium, Germany, Sweden and dozens of other countries, according to an official at the Ukrainian Embassy in Warsaw.

On Friday, more foreign volunteers were at Przemysl train station on the Polish border, preparing to cross over to fight with Ukrainian forces, either with the International Legion or informal groups of fighters. Many carried camouflage backpacks and were speaking English rather than the mix of Slavic languages usually heard there.

A 30-year-old American veteran from Massachusetts said he wanted to help the Ukrainian cause however he could. “I served a tour in Afghanistan,” he said. “I feel like I have decent tools to help these people get out of harm’s way. I have medical skills as well. Anything I can do to help them.”

Matyas Kotyk, 32 years old, said he had served a year in the Czech Republic’s military in 2010. He was also heading into Ukraine, carrying with him only a small backpack. Now a private security guard, he hadn’t told his parents or 4-year-old daughter at home where he was headed.

“I couldn’t just stay home and watch it,” he said, adding that he had never been in a firefight and didn’t have any military gear except a tactical vest. “I’m nervous, a little bit.”

Foreigners have been fighting in Donbas, in Ukraine’s east, during the eight years of war that preceded Russia’s wider invasion of the country last month, with mixed results. The Justice Department has probed the alleged role of several Americans in Donbas war crimes.

One of them, Craig Lang, has been charged with murder conspiracy in relation to a 2018 double homicide in Florida and is fighting extradition to the U.S. Mr. Lang has said he is innocent.

With the International Legion, Kyiv is attempting to get a stronger grip on the flow of volunteers who are typically drawn to war, formalizing the participation of foreign combatants and directing veterans with valued skills and battle experience to areas Ukraine most needs them.

For now, the legion is giving priority to the creation of infantry units, assigning foreign fighters based on their individual skills, the spokesman said.

Some foreigners have come to Ukraine and judged the International Legion to be more an exercise in publicity than an effective force and instead joined informal fighting brigades or the Ukrainian territorial defense, a formal citizen militia.

Ukrainian soldiers on an armored personnel carrier passed by people carrying their belongings as they fled the conflict near Kyiv.PHOTO: EFREM LUKATSKY/ASSOCIATED PRESS

Volunteers who join the International Legion are required to sign a contract binding them to military service for the war’s duration, which can qualify them for Ukrainian citizenship, a senior Ukrainian official said Wednesday.

Matthew Parker, a U.S. Army veteran and private investigator in South Carolina, has been assisting the Ukrainian Embassy in Washington, D.C., by vetting Americans who hoped to enlist.

He has cleared a group of 10 veterans, most of whom have more than a decade of military experience and were deployed in Afghanistan or Iraq, he said.

Mr. Parker said his group included drone operators, satellite-communication experts and men who knew how to use Javelin antitank weapons and Stinger ground-to-air missiles, arms that the U.S. and other Western countries have been delivering to Ukraine in great numbers recently.

Mr. Parker said his Ukrainian contacts hadn’t explained how they would utilize his group and that he feared the men would be sent with little forethought toward Russian guns or assigned menial tasks.

“We have specialties,” he said. “Don’t waste my people’s time by giving them a rifle and telling them to guard a bridge.”

Other volunteers have found their way to a prearranged collection point, a gas station one mile from the Polish border near the western Ukrainian city of Lviv. One morning last week, Bekim Zeqiri, a 27-year-old U.S. Army veteran from Westhampton, N.Y., mixed there with other volunteers, wearing a New York Yankees ball cap and a shaggy dark beard.

Other foreigners arrived. A tall man in dark glasses said he was from Venezuela. Two other men had colorful neck and facial tattoos. Ukrainian soldiers in camouflage uniforms led the men toward a bus.

“This is my adrenaline,” Mr. Zeqiri said. “This is my chance to play high-school football again.”

It wasn’t quite what he expected.

At a nearby barracks, military evaluators placed Mr. Zeqiri in a group for rapid deployment, and he received a Ukrainian military uniform, a sleeping bag, a flak jacket and helmet, an AK-74 semiautomatic rifle and 120 rounds of ammunition, he said later in a text message.

The next day, already in Kyiv, he said he was disappointed not to receive advanced American weapons. He was also concerned about a convoy of Russian tanks and troops that he heard was advancing southward on the capital.

He said he missed rapping in nightclubs and that he would prefer to go back to doing that.

A day later, as the sun rose, Mr. Zeqiri arrived in Lviv by bus and caught a cab toward the border. In a final text message, he wrote, “Poland.”

—Ian Lovett in Przemysl, Poland, contributed to this article. Write to Brett Forrest at brett.forrest@wsj.com