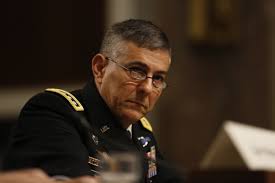 …raises concern over continuous expansion of terrorist groups in Sahel

Bad governance and corruption are leading factors that have given rise to the emergence of Military coup in Africa, the Commander of U.S. Africa Command (AFRICOM) General Stephen Townsend said on Thursday.

Africa’s Sahel region have witnessed a surge in Military coup, the latest coup in Burkina Faso is the fourth in less than 18 months. The other three were carried out in August 2020 in Mali, in April 2021 in Chad, and Mali’s “coup within a coup” last May. There was also an attempted coup in Guinea-Bissau few days ago.

Townsend, speaking at a digital press briefing facilitated by Africa Regional Media Hub, United States Department of State expressed concerns over the fate of democracy in the continent.

According to him, overthrowing elected leaders can undo decades of progress on democracy , “This military seizure of powers are inconsistent with US democratic rights and professional military ethos,” he added.


“We have enjoyed nearly 20 years with very low unconstitutional change of government, but in the last year, we have seen a number of coups and a number of attempted coups.  It has to do with a lack of Good governance and corruption”, he added.


The Commander further expressed concerns over the continued expansion of terrorist groups particularly ISIS,  al-Qaeda in the Sahel region.

“In the Sahel, Al-Qaeda and ISIS groups continue to expand  towards coastal states. We have seen some attacks in Togo and Cote D’ivoire. To me, these attacks show the expansion that I am concerned about.

“Military interventions are only part of the solutions to the problem, we help local forces have tactical success on ground, but we need the support of good governance and development . So as long as we don’t have coherent approach from African  partners international partners and the US, I think terrorists  will continue to take advantage of that and continue their expansion. I am not satisfied with progress made and I think there’s more work to be done,” Townsend said.