Why Putin won’t ever let Ukraine be Finland 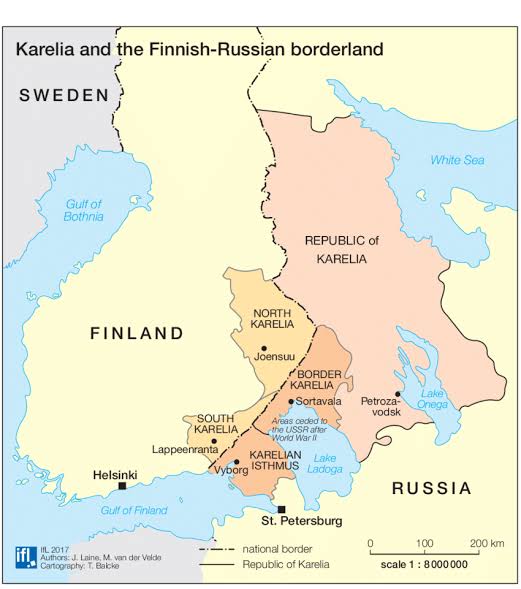 •Why a widely touted model for Ukrainian neutrality won’t work to stop a Russian invasion.

The idea that Ukraine should become a neutral buffer between the East and West is gaining popularity as a way of resolving the present crisis in Eastern Europe. Some call it “Finlandization” or “the Finnish model,” in reference to Finland’s policy of neutrality during the Cold War. Just last week, French President Emmanuel Macron reportedly suggested that Finlandization be “one of the models on the table” to discuss with Russian President Vladimir Putin as a way to ease tensions over Ukraine. The next day, Macron dismissed the option, insisting he had been wrongly quoted. But others, like New York Times columnist Thomas Friedman, still suggest a neutral Ukraine could take away Putin’s perception of being “encircled by NATO” and end his military buildup around Ukraine.

This idea is mistaken for two reasons.

First, Ukraine is a de facto neutral state. It is not a member of NATO nor a member of the European Union, however much it would like to be. As former NATO Secretary-General Jaap de Hoop Scheffer recently said: “Everyone, including Putin, knows that Ukraine will not become a NATO member in the foreseeable and unforeseeable future. It’s already a buffer country. It’s something you’ll never hear NATO Secretary-General Jens Stoltenberg say; his position won’t allow it. But I can say that now.” One of the reasons why Ukraine has little prospect of joining NATO is, of course, that its borders are not stabilized—thanks to Putin. The same happened with Moldova and Georgia.

Despite this, Putin is extremely upset. He cannot live with a neutral Ukraine next door. On the contrary, he wants to subordinate it and place it under Russia’s sphere of influence, where it once was. His method for accomplishing this is aggression and intimidation, tracing back to his annexation of Crimea and occupation of the Donbass region in 2014. He has thus far accomplished the opposite of his intended goal: Ukrainians increasingly desire integration with the West. Although in April 2012 only 13 percent of Ukrainians saw NATO as their best security option, in August 2019, this increased to 36 percent. According to another poll, support for NATO membership in Ukraine was 53 percent in 2021.

This is what upsets Putin: While Ukraine remains a neutral state, many Ukrainians are moving beyond Russia’s orbit. The more Putin pressures them, the more they look to the West and cherish their sovereignty, democracy, and free press. Having Ukraine as a buffer state is clearly not enough for the Russian president; he wants to undo its sovereignty, democracy, and independent institutions. This is why he amassed around 130,000 troops around Ukraine in recent weeks. As former Portuguese Europe minister Bruno Maçães wrote: “Putin does not want a neutral Ukraine. He wants a Russian Ukraine.”

This brings us to the second reason why the comparison with Finland’s neutrality during the Cold War is wrong: For decades, Moscow allowed Finland, within its strict neutrality, to remain democratic and further develop its independent institutions. Over the years, aware of the permanent danger to antagonize Russia, Finland slowly but decidedly moved westward. Moscow allowed this because Finnish neutrality was guaranteed by the 1947 Paris Peace Treaties. Finland could not be a member of NATO, the European Union, or any club that Moscow considered Western—but while carefully respecting this constraint, Finland did have the freedom to govern its own country. For sure, this freedom had to be won step by step. Rene Nyberg, a former Finnish ambassador to Russia, said in an interview that Finnish governments used to walk on eggshells with Moscow. For example, Finland was not allowed to become a member of the European Free Trade Association, a club of non-EU members. Then, shrewdly, Helsinki proposed to set up two associations: Finefta, the Finland-European Free Trade Association; and an exactly mirrored counterpart to Comecon, the Council for Mutual Economic Assistance, consisting of communist countries. “By smart maneuvering, we got away with this,” Nyberg said. “Of course, we did use Finefta while the Comecon variant was never activated at all.”

The 1947 peace treaties settled both Finland’s strict neutrality and its 832-mile-long border with Russia. Finland evacuated all Finns from territories that were handed over to Russia, burning houses and entire villages. This was painful. But as a result, there were no irredenta, regions under the legal jurisdiction of one state whose main cultural, historic, and ethnic ties are with another state. The 1947 border was never disputed. For years, Finland was a large exporter to the Soviet Union. Moscow called Finland a “friendly” country. This arrangement, however delicate, was supported by both sides because under the circumstances, it was in both of their interests. One thing was always clear, Nyberg said: “Finns lived on one side of the border, with their strong institutions and parliamentary democracy; on the other side, Russians lived under one-man rule. It was a clean cut. We belonged to the free world, to the West.”

It is this freedom and sovereignty to decide one’s own fate that Putin now denies Ukraine, even if it remains de facto neutral. There is no peace treaty between Russia and Ukraine guaranteeing Ukraine’s neutrality. Nor could there be: Ukraine would not agree to it. Therefore, the relationship between the two countries is dominated by suspicion and distrust. Russian troops now occupy Donbass and Crimea. This is another stark difference with Finland: After the 1947 peace treaties, the Soviets’ Red Army never set foot in Finland again.

Putin’s real problem is countries that were once part of the Soviet Union and of earlier tsarist Russia ran away to the West (or tried to) after the fall of the Berlin Wall in 1989. It is no coincidence that they applied for NATO membership first and for European Union membership afterward. NATO, they calculated, would protect them against Moscow. Poland and Hungary may now have difficulties in the EU, testing its values and principles. Tellingly, they do not play these games within NATO. None of the NATO countries that were in the Soviet camp during the Cold War have second thoughts about membership. While Putin threatens those nations with invasions, demands NATO statutes be changed, and urges their troops to be withdrawn, they never break ranks within NATO. Even Hungarian Prime Minister Viktor Orban, who often bends over backward to Russia and other autocracies, would not dream of breaking ranks with NATO.

What Ukraine Can Learn From Finland

xRussia is determined not to lose Ukraine the same way. In long essays for the Stockholm Centre for Eastern European Studies, all six former Swedish ambassadors in Moscow who are still alive consider the current conflict both predictable and unavoidable. Some vividly remember how reformers working with then-Russian President Boris Yeltsin in the early 1990s, while accepting that former parts of the Soviet Union that had gained independence would enjoy sovereignty, somehow still expected them to remain together in a loose union. When it came to Ukraine, the reformers were outright nostalgic: “We have been there at home. … We will need a visa to go to Yalta in the Crimea or to Odessa, where we were born and raised. … ‘Russia’ is something more than the ‘Russian Federation,’ we cannot really imagine it without Ukraine. Borders only breed conflicts and contradictions.” They would have never spoken about Finland like this.

In those days, interestingly, Russian leaders hardly ever blamed the West for NATO and EU enlargement. Yeltsin seemed to understand that it was not the West pulling them into its orbit but rather the former Soviet satellites escaping from Russia. He grasped that both NATO and the EU were ambivalent about integrating with Eastern Europe but did not want to refuse it—which is still the case today. Yeltsin knew this ambivalence firsthand: He, himself, talked about EU membership for Russia for a while but gave up when Brussels did not reply. This explains why Yeltsin initially did not blame the West—but rather, Russia—for being too weak to stop the collapse of its sphere of influence. This is, of course, what has changed now, at least militarily.

Political changes in Russia are always dramatic but also superficial. There was never a real rupture with the past. Former Communist elites, including intelligence and security services, which Putin was part of, still rule the country. Their mental framework remains unchanged. Perhaps the essence of the West’s problem with Russia is that the West believes real change is possible, whereas Russia does not.

Tomas Bertelman, Sweden’s ambassador to Russia from 2008 to 2012, noted that unlike other 19th-century empires, Russia was never decolonized. The Russian Empire collapsed in 1917, but the Soviet Union extended its life for another 70 years. “Russia,” Bertelman wrote, “had no other identity apart from the empire, and the perpetuation of the empire became and still is so important to the regime that it influences both the way the country is governed and the use of its resources.”

The tradition of empire and authoritarian tendencies interact and have common roots. They have shaped Putin and come to exert a decisive influence on Russia today. The current crisis is one result. This cannot be solved by just turning Ukraine into a new Finland. In the eyes of Moscow, Ukraine is not Finland—and that is precisely the problem.

Caroline de Gruyter is a columnist at Foreign Policy and a Europe correspondent and columnist for the Dutch newspaper NRC Handelsblad. She currently lives in Brussels.