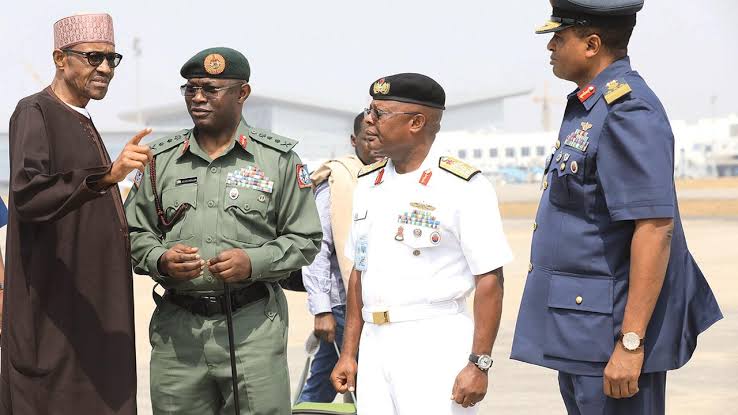 The Nigerian Army has listened to the outcry against the alleged withholding of entitlements of soldiers, especially those engaged in internal security operations against Boko Haram terrorists/Islamic State in West Africa Province (ISWAP) in the North East and other parts of the country.

This is even as the presidency have been urged to set up an investigative board of inquiry to look into the welfare of Nigerian military as soldiers still raised concerns over what they regard as high level of corruption in the military, robbery of their allowances, entitlements and discriminatory wage disparity in the armed force.

Sources within the Nigerian Army speaking on the condition of anonymity grumbled over the non payment of allowance that is due to soldiers fighting insurgency in the Northeast and their poor salary compared to their counterparts in the Nigerian Navy and Nigerian Air Force (NAF), which according to them is morale dampening.

In another letter, allegedly signed by a certain Lcpl Musa A of the Nigerian Army to President Muhammadu Buhari, revealed that sequel to the initial petitions to president on the matter, the sum of N20, 000 was paid to soldiers as combat duty allowance.

Musa however, described the payment as just a camouflage by the Nigerian Army as they will never pay anything again and the long gap salary disparity will still remain.

He said there is a need to address the disparity and ensure equal payment among the Armed forces of Nigeria to boost the morale of troops in fighting against insurgency especially prestigious North East.

The letter reads:” Sequel to the grumbling in the Army due to pay disparity with other Arm forces of Nigeria, I on behalf of colleague are here to appreciate the media over their concerns and support they gave to us in publishing the News.

“Media indeed are the voice of voiceless and help of helpless, there are many petitions written by our fellow soldiers but due to no media intervention all in vain but this one due to help of media, Nigerian Army has today paid into personnel account the sum of twenty thousand naira respectively according to their ranks (N20, 000) . “

“But the question is that the money is for what? All we seek is salary equality but Army just on February 13, 2020, paid money called combat duty allowance. Point to be noted is that, army just paid this money to do camouflage after this one they will never pay anything again and the long gap salary disparity will still remain.

“Please media help us broadcast this till it reach PRESIDENCY to ensure equal payment between the Armed Forces of Nigeria that will boost the troops morale in fighting against insurgency especially prestigious North East.”

“Thank you Media, we really appreciate and hope you people will come to our aid.

“Yours faithfully LCpI Musa A.”

Meanwhile , a certain Security Expert, Mr. Dickson Omodiale Osajie, who made the call to the presidency to investigate the matter, said uniformity across the armed forces is important. He bemoaned the alleged robbery and cheating of soldiers in terms of allowances.

“The presidency should set up an investigative board of inquiry to look into the soldiers welfare because the knowingly or unknowingly cheating in the army is a subject matter”, Osajie said.

He added, “Never ever gamble with the BENEFITS of a SOLDIER, if you do that as a senior officer you are exhibiting a high spate of animal behaviour and you think you are living life, No!

“I will suggest that after army officers has passed out from the defence academy, they should all be transmitted into an aircraft for additional six month training abroad in USA, Canada, or UK, to see how officers deals with soldiers welfare with immediate automatic alacrity.”

The concept, according to him is to enlist the soldier and retain the families.

“There are two mind-sets in the frontline, the enemies mind-sets and the state mind-set. The enemies mind-set is that, they are fighting to die and go to wherever they believe they are going, but the soldier’s mind-set is to fight and reunite with their families and you kept him away from his family over three years? That is an energetic and intentional Operational error”, he warned.

Also as part of the Increase Transparency, Accountability and Integrity (ITAI) project, the Civil Society Legislative Advocacy Centre (CISLAC) and its partner, Transparency International – Defence and Security (TI-DS), recently organised a workshop and discussion about the transparency, integrity and adequacy of the 2020 Nigeria Defence Budget.

Speaking on the the need to ensure accountability in the Management of defence and military budgets, the Conflict Advisor, CISLAC, Mr. Salaudeen Hashim,  stressed that the aim of the workshop organised in collaboration with the Centre for Peace and Strategic Studies, University of Ilorin, was to analyse the challenges and gaps of the defence expenditures, procurement and other fiduciary aspects in the context of the security challenges across Nigeria from a civil society perspective.

Hashim noted that this was also used to “discuss the next edition of the Government Defence Integrity Index (GDI), a tool used by TI-DS and CISLAC for measuring the integrity, transparency and accountability in the defence sector.

According to him, the participants drawn from Defence and Security Correspondents, brainstormed on “strategic approach for advocacy towards more transparent and accountable defence sector, discussed in the context of real or perceived shrinking civil society space, in particular in the domain of defence and security”.