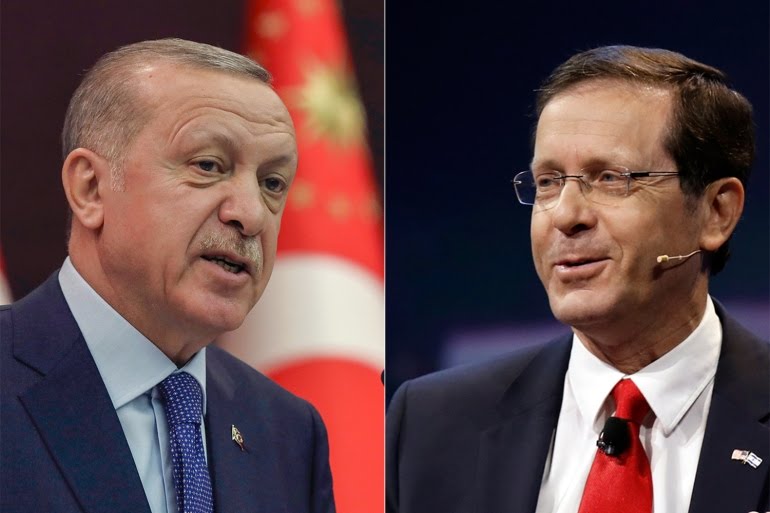 •The ground in the Middle East is shifting yet again.

The diplomatic map of the Middle East is shifting yet again. A surprising thaw seems to be afoot between Israel and Turkey, former close partners whose relations nosedived under Turkish President Recep Tayyip Erdogan. Last week, Erdogan announced that Israeli President Isaac Herzog will visit Ankara in mid-March, which would make Herzog the first Israeli president to visit Turkey since Shimon Peres’s 2007 trip. (The Israeli government has yet to confirm the trip but has acknowledged a “possible visit.”) Hopes for a Turkish-Israeli rapprochement were bolstered further by a phone call last month between Israeli Foreign Minister Yair Lapid and his Turkish counterpart, Mevlut Cavusoglu—the first publicly acknowledged conversation between the two countries’ foreign ministers in 13 years.

That Erdogan is looking for new partners—and appears willing to mend relations—is understandable. He faces a collapsing economy, rising domestic opposition to his rule, conflict with Arab neighbors and traditional Western allies, and new turmoil in the region as Russia prepares to invade Ukraine.

Turkey was the first Muslim-majority country to recognize the new Jewish state in 1949, and the two enjoyed robust diplomatic, security, and intelligence cooperation over many years. However, since Erdogan’s Islamist-rooted Justice and Development Party rose to power in 2002, bilateral relations have turned into a roller-coaster ride. Now, the Turkish leader’s growing isolation in the Eastern Mediterranean and economic woes at home are forcing him to reach out to his sworn enemy.

Israel is treading carefully, given Erdogan’s frequent antisemitic and anti-Israeli vitriol, which the U.S. State Department called out as “reprehensible” and “incendiary” as recently as May 2021. “I have no illusions with regard to Turkey,” Israeli Prime Minister Naftali Bennett recently told Haaretz. “We are very familiar with all the dynamics.”

High on the list of Israel’s concerns is Erdogan’s unwavering support for Hamas, the U.S.-designated terrorist group in control of Gaza. Among other kinds of support, Ankara has granted Turkish citizenship and passports to senior Hamas operatives, including one who “oversaw a plot to assassinate the [then] mayor of Jerusalem, as well as other Israeli public figures,” according to a 2020 Telegraph report. Erdogan has flaunted hosting two senior Hamas leaders, Saleh al-Arouri and Ismail Haniyeh, both of whom are on Washington’s list of global terrorists. It is therefore no surprise that Israel’s Shin Bet intelligence agency “stressed in the internal discussions about Turkey that any normalization process must include limiting Hamas activity in Turkey,” as Axios recently reported.

Any normalization of Israeli-Turkish relations won’t happen as quickly as it did between Israel and, say, the UAE.

What adds to Israeli suspicion—and gives Erdogan’s overtures to Israel an ironic twist—is his industrious efforts in 2020 to undermine the Abraham Accords, the U.S.-brokered agreement to normalize relations between Israel and several of its erstwhile Arab adversaries. The Turkish government joined Iran and Hamas in condemning the agreement and went as far as threatening to suspend diplomatic ties with the United Arab Emirates as punishment for joining Bahrain, Morocco, and Sudan in making peace with Israel.

Since then, Erdogan has walked back that threat against the UAE, apparently as part of a wider effort to mend relations with the UAE, Egypt, Saudi Arabia, and other Arab countries with which Turkey has clashed in recent years—and now, with Israel. The diplomatic flurry included a November 2021 visit to Ankara by Emirati Crown Prince Mohammed bin Zayed, whom Turkish state media demonized as a “dark prince” as recently as 2020. Erdogan clearly hopes to tap into Emirati capital to help stem Turkey’s economic meltdown. Since their rapprochement, Abu Dhabi and Ankara have signed a $4.9 billion currency swap agreement, while Abu Dhabi’s sovereign wealth fund has pledged to invest $10 billion in Turkey. The UAE, for its part, not only expects a good return on its investment but also sees Turkey as a potential hedge against Iran as the Biden administration reaches out to Tehran for a new nuclear deal.

While Israel doesn’t have state-controlled petrodollars to shower on Turkey, it does have financial, economic, and technological power in the region. Improved relations with Israel could also help burnish Turkey’s tarnished global image, not least as an investment destination. An unprecedented exodus of Western capital from Turkey over the last few years has risked Turkey’s designation as an emerging market by leading financial institutions and could result in its demotion into the category of so-called frontier markets, which would make Turkish bonds and equities uninvestable for most of the world’s funds. That would hasten Turkey’s economic implosion—and compound Erdogan’s political worries.

There is also the enticing future possibility of building an Eastern Mediterranean pipeline to bring Israeli natural gas to Turkey and from there to Europe. Even talk of such a pipeline—still theoretical given various difficulties—could help boost morale for Turkish businesses and households in revolt over paralyzing power cuts and skyrocketing utility bills. During the Turkish-Israeli rift that followed the 2010 Gaza flotilla crisis, Turkey regularly snubed possible energy deals with Israel, but Erdogan revamped the pipeline project earlier this month and appears enthusiastic about getting back to business. Following the Biden administration’s withdrawal of its support to an envisioned Israel-Cyprus-Greece pipeline last month, which Ankara has spun as Turkish victory, Erdogan has another reason to capitalize on the Israel-Turkey alternative.

At least as importantly, Erdogan also hopes that mending relations with Israel and Egypt will help reverse Turkey’s growing isolation in the Eastern Mediterranean. The region has witnessed an astonishing and unprecedented diplomatic and military partnership among Israel, Egypt, the UAE, Greece, and Cyprus, which have all been alarmed by Turkey’s growing assertiveness in the region; the group is also enticed by the prospects of energy cooperation under the umbrella of the East Mediterranean Gas Forum, an organization Ankara hopes to join one day. Turkey has long seen Greece and Cyprus as archrivals, and another purpose of Erdogan’s diplomatic flurry might be to try to dislodge them from the region’s fast-evolving network of partnerships. As of now, that does not appear to be a price Israel is willing to pay. The Jerusalem Post reported that, according to an Israeli government source, “improvements in Jerusalem-Ankara relations will not come at the expense of Israel’s alliance with Greece and Cyprus.”

While Erdogan’s sudden about-face with Israel has raised suspicions among Israeli analysts, there is a cautious optimism among Israeli officials for a gradual improvement of ties with Turkey. That could allow not only an exchange of ambassadors but also tactical cooperation against Iran and its proxies in the Middle East. Policymakers in Ankara are “no great friends of Iran, to put it mildly, and we can’t afford to assume some mantle of purity that will prevent us from creating alliances,” an unnamed Israeli diplomat recently told Haaretz.

Any normalization of Israeli-Turkish relations won’t happen as quickly as it did between Israel and, say, the UAE, which had been closely cooperating for many years. Given Erdogan’s poisoning of relations with Israel over the last two decades and his frequent U-turns, it will take time and effort to rebuild trust. Ankara similarly has reservations. On Tuesday, Cavusoglu said that “any step we take with Israel regarding our relations, any normalization, will not be at the expense of the Palestinian cause.” But Ankara knows that Israel is now, thanks in part to the Abraham Accords, less isolated in the Eastern Mediterranean than Turkey, and it has less to lose if normalization attempts with Turkey fail. The onus is thus on the Erdogan government to be proactive in improving relations.

Ultimately, a real rapprochement built on trust might have to wait for a new Turkish government. A big-tent opposition bloc appears poised to defeat Erdogan in the 2023 presidential and parliamentary elections. But as an embattled Erdogan seeks to undo some of the economic and foreign-policy damage he has wrought, setting in motion a return to better relations with Israel would be a good way to start.

Aykan Erdemir is the senior director of the Turkey program at the Foundation for Defense of Democracies and a former member of the Turkish parliament. Twitter: @aykan_erdemir