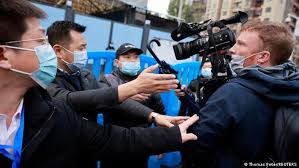 An annual survey published on Monday by the Foreign Correspondents’ Club of China (FCCC) has found that foreign correspondents in China are facing “unprecedented hurdles” in their reporting from the country.

“The FCCC is troubled by the breakneck speed by which media freedom is declining in China,’’ a statement from the FCCC said.

Out of those who took part, 99 per cent said they felt working conditions did not meet international standards.

In the run-up to the Beijing Winter Olympics, which began on Friday, 60 per cent of the 127 respondents criticised the insufficient information provided by the organisers, stated the report.

It said almost a third of respondents complained of being excluded from events that would have been open to other media. Visa denials, surveillance, intimidation, and harassment were reported.

“As a result, reporting from China is suffering,’’ the FCCC said.

China correspondents unable to report directly from the country had taken up residence in Taipei, Singapore, Sydney, Seoul, or even London, said the report.

Meanwhile, those able to work in the country routinely suffer significant restrictions on their work, the report says, with 62 per cent saying they had been prevented from reporting at least once by police or other officials.

Out of those who had visited Xinjiang, the region of northwest China where persecution of the Muslim Uighurs has been the subject of international condemnation, 88 per cent were reported being harassed.