Skip to content
CHINA AND ASIA RUSSIA AND EUROASIA

What China thinks of possible war in Ukraine 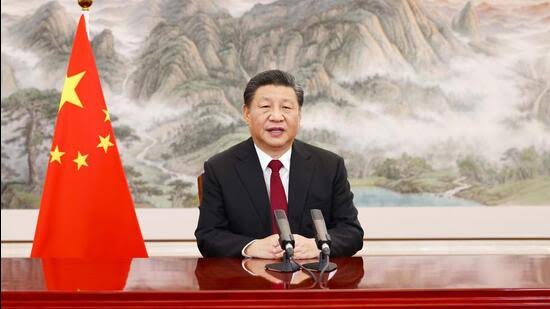 China’s relations with Russia are the strongest they have been for 70 years. When President Xi Jinping welcomes Vladimir Putin, the Russian leader he calls his “best friend”, to a planned summit just before the Beijing Winter Olympics open on February 4th, powerful interests will bind the two men. China has capital to invest, technology to sell and an ever-growing appetite for oil, gas and other commodities. Russia’s economy, though ailing, complements China’s, offering natural resources that can be supplied via pipelines and railways which are—in happy contrast with maritime supply routes—immune to blockade by foreign navies. A sense of history unites the leaders. Both see a world order being reshaped by American weariness and self-doubt, creating chances to test and divide the democratic West. Chinese and Russian diplomats and propaganda organs relay and amplify parallel narratives about the benefits of iron-fisted order over American-style dysfunction. Joint military exercises demonstrate growing trust.

In a recent speech in Australia aimed at rallying “freedom-loving democracies”, Britain’s foreign secretary, Liz Truss, described China and Russia as aligned and “emboldened in a way we haven’t seen since the cold war”. In Washington commentators suggest that China and Russia see a shared interest in a Russian armed adventure in Ukraine that tests President Joe Biden’s resolve and finds it wanting. Some go further, arguing that Mr Xi might watch an unchallenged Russian attack on Ukraine and conclude that he can safely invade Taiwan, the democratic, self-ruled island of 23m people that China claims for its own. In this telling, China’s scruples about Ukraine mostly involve timing. An American news service recently claimed that Mr Xi asked Mr Putin not to attack during the Olympics, citing unnamed diplomats. China’s embassy in Moscow called that report “a hoax and a provocation”.

These being important questions, Chaguan sought the views of Chinese scholars who specialise in Russia. They call it ignorant to imagine that Communist Party bosses might endorse attacks on Ukraine, let alone see in it a trial run for an invasion of Taiwan. True, Chinese scholars usually grumble when foreigners doubt that China is anything other than a peace-loving giant. Such academics are also duty-bound to reject comparisons between foreign invasions and an assault on Taiwan, whose fate China deems a domestic question. More convincingly, Chinese experts sound sincerely insulted by the idea that conflict in Ukraine would set a precedent for something as grave as war over Taiwan. They do not hide their belief that Russia simply does not matter as much to America as China does. Indeed, they concede that China returns the favour, thinking more about confrontation with America than friendship with Russia. China-Russia ties may be closer than they have been since the days of Mao and Stalin, when the Soviet Union was China’s “Big Brother”, an overbearing but indispensable patron. That does not make them uniquely important.

China was a study in caution after Russia invaded Ukraine in 2014. In keeping with its obsession with its own territorial integrity, China abstained when the un Security Council considered the Ukraine crisis in 2014. Chinese officials blamed tensions on plots and meddling by hostile Western forces, rather than Russia. But China has never recognised Russia’s annexation of the Crimean peninsula, and has since worked to build trade with Ukraine. China criticised American and European sanctions imposed on Russian officials, banks and companies after 2014. But by and large Chinese banks and companies did not try to bust them, putting access to Western markets and financial systems first. China has helped Russia reduce its vulnerabilities to sanctions, making it easier to use Chinese yuan for some payments rather than dollars. Such initiatives have always been limited by Chinese capital controls, though. In 2014 Russian elites had “very naive expectations” of the help that China would offer, says Alexander Gabuev, a China expert at the Carnegie Moscow Centre, a think-tank. Now the two countries are more realistic about each other, he says, and relations are the stronger for it.

China and Russia: aligned, but not alike

In China some nationalist professors with large social-media followings proclaim that Chinese firms would surely defy American sanctions imposed over a fresh Ukraine conflict. They predict that if America takes the dramatic step of cutting Russian banks’ access to swift, an international payments system, China might build an alternative payments network with Russia, to challenge the dollar’s hegemony. Other, more sober scholars are sceptical. Feng Yujun, director of the Centre for Russian and Central Asian Studies at Fudan University in Shanghai, suggests that as a commodities exporter, Russia can survive economic isolation, whereas “China’s development hinges on being tightly connected to the world’s industrial, value and supply chains.” Mr Feng disagrees that China would profit from a Russia that isolates itself further from the West. Russia already seeks China’s money, technology, markets and political support. How would China gain from a still more dependent Russia, he asks?

Yang Cheng, an expert on Russia at Shanghai International Studies University, suggests that a major conflict in Ukraine would bring few benefits to Mr Putin. But he also argues that America has few good options. For one thing, sanctions that hit Russian energy exports risk fuelling inflation that hurts America, he says. As for Russia’s demands for sweeping security guarantees as a price for peace, Mr Biden can either accept them and duly confirm America’s reduced clout, or reject them and risk turmoil in Ukraine. Still, Mr Yang sees no specific benefit to China in such a clash, for he is sure that America’s foreign priority will remain “the grand strategy of containing China”. He is not alone in his analysis. Seen from China, a skirmish in Ukraine is a risky sideshow, not a window on any future world order.