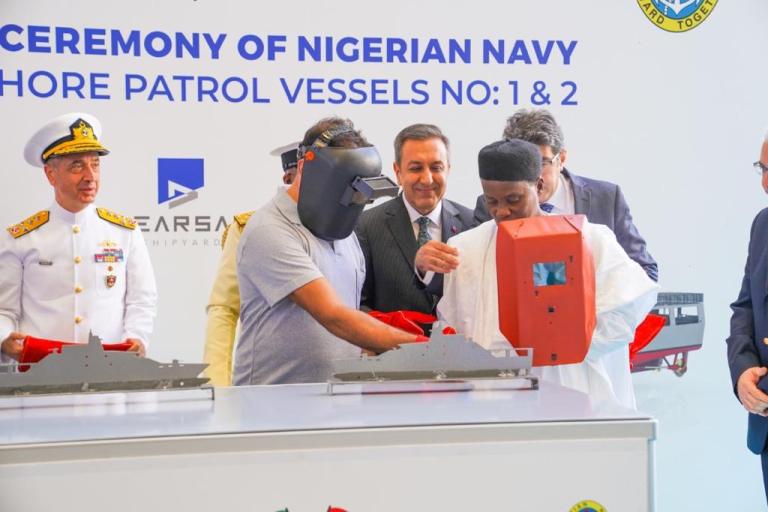 The Keel laying ceremony comes about 10 months after the Nigerian Navy (NN) signed a contract with Dearsan Shipyard, Turkey for the construction of 2 units of 76m HE OPV, precisely on 3 November 2021. The ceremony was performed on Friday 16 September 2022 .

According to the HMOD, “Signing of the contract did not only represent the commitment of the Nigerian Government to improve the operational effectiveness of the Nigerian Navy but also serves to strengthen the strategic alliances between Nigeria and Turkey.

“The Keel laying ceremony thus signifies the formal start of the ships’ construction.” This is often marked by a short ceremony attended by dignitaries from the shipyard and the owners of the ship being constructed and this was the case in Dearsan Shipyard, Turkey on Friday 16 September 2022.”

On his part, the Nigerian Chief of Naval Staff added that, “the HEOPVs, are configured in line with the Nigerian Navy requirements, which are designed and built entirely in the shipyard’s facilities and will be equipped with modern systems. The OPVs will be capable of conducting Search and Rescue operations, anti-piracy, anti-smuggling and anti-drug trafficking operations as well as disaster relief operations among others.

“The vessels will be deployed to project naval power within the Gulf of Guinea (GoG), contribute significantly to enhancing global maritime commerce, deterring oil theft and ensuring secure seas for exploration and exploitation of Nigeria’s maritime and hydrocarbon resources.”

The CNS further added that the 2 HE OPV are expected to be completed within 37 months from the date of signing the contract. He affirmed that, “the construction of the HE OPVs is indeed another manifestation of the Federal Government’s commitment in maintaining a well-equipped navy that Nigerians would be proud of, and that is capable of discharging its constitutional roles. The Navy sincerely thanks the President, Commander-in-Chief of the Armed Forces of the Federal Republic of Nigeria, Muhammadu Buhari GCFR and the HMOD as well as the Senate and House Committees on Navy for their untiring support to the Nigerian Navy towards successful acquisition of these platforms and for the tremendous support towards actualization of this project being part of the fleet renewal/recapitalization efforts of the NN.”

“The keel laying ceremony marks the beginning of not just the construction of the HE OPVs at Dearsan Shipyard but a landmark cooperation between the Governments of Nigeria and Turkey. This relationship is expected to flourish significantly as the Federal Government of Nigeria continues to patronise Turkish companies in further support of our national security and for the mutual interest of both 2 countries,” he further said.

In company of the HMOD was the Chief of the Naval Staff, Vice Admiral Awwal Zubairu Gambo, Chief of Naval Transformation, Rear Admiral Okon Edet Eyo and the Director Ship Design and Architecture, Rear Admiral Abolaji Abolade Orederu among other staff officers from the Naval Headquarters, Abuja. Other dignitaries at the ceremony were the Nigeria Ambassador to Turkey, Mr Ismail Abba Yusuf, the Defence Adviser Brigadier General Ibrahim Khalil Mu’azu, the Turkish Chief of the Naval Staff , Admiral Ercument TATLIOGLU, the President Dearsan Shipyard, Mr Aziz Yildirim among other guests.