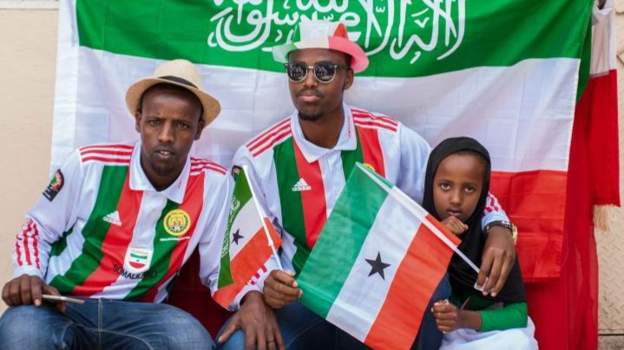 •While attention is elsewhere, DoD wants to send US troops back to Somalia

The US Department of State has dismissed the latest bid for recognition by the leader of self-declared republic of Somaliland.

President Muse Bihi Abdi is on a charm offensive in the US where he made a passionate plea for international recognition as a nation state.

Somaliland seceded from Somalia more than 30 years ago, but it is not recognised as an independent state by the African Union or the United Nations.

President Bihi said 10 years of unification talks with Somalia “had achieved nothing”.

“[Somaliland] is prepared to pursue all available avenues for international recognition.

The US Department of State said it welcomed the meeting with Mr Bihi and the discussions on “strengthening US engagement with Somaliland within the framework of our single Somalia policy”.

Since declaring independence from Somalia in 1991, Somaliland functions like a country – with its own passport, currency, flag, government and army.

US troops back in Somalia

There’s a growing array of competing, armed groups on the ground and as usual, the US thinks it can just walk in and sort it all out.

Last week, the Wall Street Journal reported that the Pentagon is urging President Biden to deploy several hundred U.S. commandos to Somalia to aid the ongoing war against the militant group al-Shabab.

If Biden agrees with this proposal, it will reverse President Trump’s decision to withdraw approximately 700 Army Green Berets, Navy SEALs, and Marine Raiders from Somalia, where they had been training an elite special forces unit known as the Danab Brigade.

The Journal tells us very little about the Danab Brigade, other than to quote senior U.S. officers who argue that it “fights more effectively when consistently side-by-side with experienced U.S. special-operators.”

Putting aside the infantilizing language that is so often employed to characterize U.S. “partner” forces in the region, it is worth reflecting on the fact that the U.S. military relies more and more heavily on African security forces for counter-terror operations on the continent.

This dispersal of power requires careful consideration of the racialized labor that sustains war-making in Somalia, as it is African security personnel that assume the primary burden (in terms of injury, PTSD, and loss of life) that come with direct combat.

The Danab Brigade was established in 2014 with initial funding from the U.S. State Department that paid for the services of Bancroft Global, a private security firm that trained and advised the unit. Since then, it has also received funding and training from the Department of Defense.

As independent journalist Amanda Sperber reported in 2020, there have been a growing number of allegations that Danab has been responsible for the extra-judicial killings of civilians, and for destroying property.

While touted as Somalia’s “most professional and capable fighting force,” the reality is that it is one of many security forces that have been trained and equipped by the United States and other actors.

To paint a picture, as the Journal does, of al-Shabab on one side of the conflict, and the Danab Brigade backed by the United States on the other, is to overlook a significantly more complex reality on the ground: one that has been made more unstable by the involvement of numerous external actors and interests that have funded and trained a growing array of military and security forces.  Former deputy assistant secretary of defense for security cooperation Tommy Ross, for example, characterized the involvement of Bancroft Global as a “recipe for disaster,” noting that Bancroft has other business interests in Somalia that have created a “potential for conflicts of interest and profiteering.”

The result, as scholars have shown us, is different military forces with different loyalties, capabilities, and priorities, many of whom are often engaged in battle with one another, rather than with al-Shabab.

To speak confidently of a supposed uptick in al-Shabab activity — as U.S. military personnel are doing in their effort to convince Biden — is to presume knowledge that these violent incidents can definitely be attributed to al-Shabab, when the reality on the ground suggests it is not so simple.

With this complexity in mind, the decision to redeploy U.S. special forces to Somalia will likely have a minimal impact on stability in Somalia itself. As military officials themselves have acknowledged, Biden has allowed American troops to visit Somalia periodically to continue their training and cooperative work with Danab.

It is the broader political economy of war, of which the United States is the primary architect, that should be in question and subject to scrutiny. Only by expanding our lens to account for the wider set of actors who have become entangled in this landscape can we begin to chart a new path away from the destruction and devastation of endless war.