China ramps up efforts to control media narrative in Africa 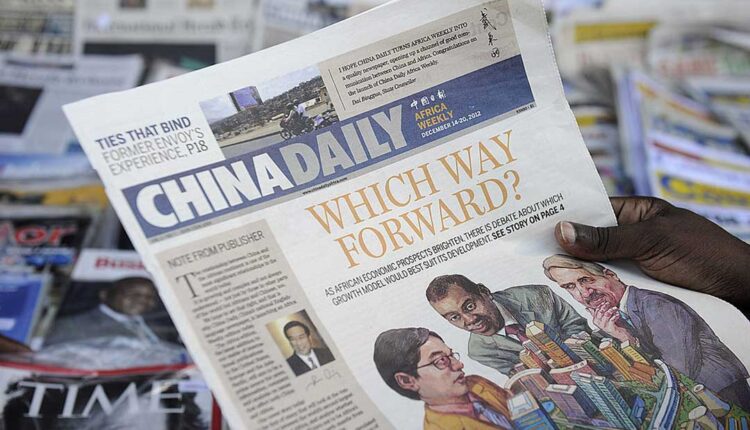 The outbreak of COVID-19 has led China to supercharge its nearly 14-year propaganda effort in Africa, increasing pro-China themes in the continent’s media while attempting to deflect blame for the pandemic, researchers have found.

Across Africa, China is using its social media channels, television and newspaper ownership, and diplomatic connections to spread disinformation about the disease, amplify pro-China stories and suppress negative coverage.

A survey of journalist unions in 50 countries by the International Federation of Journalists (IFJ) found that more than half said news coverage of China in their national media grew more positive during the pandemic, while nearly 20% said the Chinese embassy or ambassador made frequent comments about local media coverage. Eighty percent said they were concerned about disinformation in their national media.

“The findings reveal an activation of the existing media infrastructure China has put in place globally,” IFJ reported. “As the pandemic started to spread, Beijing used its media infrastructure globally to seed positive narratives about China in national media, as well as mobilising more novel tactics such as disinformation.”

China has built its African propaganda system on the idea that China and African nations have common post-colonial experiences. Despite China’s rapid economic rise over the past two decades, much of its messaging in Africa still revolves around the struggles of developing countries.

“Chinese authorities have made a very interesting reading of Sino-African history to highlight issues that speak of shared colonial struggles, particularly when they help to portray China as a friend and supporter of African liberations movements,” Dani Madrid-Morales, an assistant professor at the University of Houston in the U.S., told ADF. He has done extensive work on China’s messaging strategy in Africa.

By amplifying Chinese-African history, even reaching back as far as Chinese explorers in the 15th century, China aims to blunt claims that its actions on the continent amount to neo-colonialism, according to researcher Bjørnar Sverdrup-Thygeson in an article published by the journal International Politics.

At the same time, China uses the shared-struggle message as a wedge to undercut U.S. and European influence on the continent, Sverdrup-Thygeson added.

The shared-struggle message plays out more frequently on social media than in conventional media, Madrid-Morales said. The Chinese embassy in Tanzania is an example of how Chinese diplomats invoke this narrative on Twitter in the hopes of building connections, he said.

On the 60th anniversary of Tanganyika’s independence, for example, the embassy tweeted out a congratulatory message from the ambassador along with images of Mao Zedong and Xi Jinping greeting leaders of the nation, now known as Tanzania.

There’s just one problem with China’s attempt to build its shared-struggle narrative with Africa: “Most Africans do not see this shared history,” Madrid-Morales said.

Since the outbreak of COVID-19, Chinese authorities have become prolific users of Facebook and Twitter, although both social media platforms are banned in their own country. Under China’s “Wolf Warrior” program, the number of Chinese diplomatic accounts on the two platforms more than tripled from 75 at the start of 2019 to more than 265 by the end of 2021.

The Associated Press found Chinese diplomats, including those in Africa, use those accounts to generate disinformation about COVID-19. They spread conspiracy theories and question international efforts to control the outbreak. They also receive help from Russia’s disinformation machinery, according to the AP.

“China borrowed some tools from Russia but used them for different ends, sanitizing its own record and spreading conspiracy theories on a global scale,” Edward Lucas, co-author of a report on Chinese and Russian propaganda by the Center for European Policy Analysis, told Radio Free Europe/Radio Liberty.

Twitter reported in 2020 that it has removed 23,750 Chinese accounts it described as “highly engaged” in spreading disinformation related to the pandemic. Another 150,000 accounts were removed for amplifying that disinformation. China’s campaign to control the narrative includes Xinhua, its central news agency, which has partnerships with African media outlets in Ghana, Sierra Leone, South Africa and elsewhere.

China’s Nairobi-based CGTN television channel and newspapers China Daily and ChinAfrica provide China with other outlets — often staffed by Chinese-trained African journalists — to promote its activities on the continent, support African authorities, and soften criticism of the Chinese government.

In rural Kenya, for example, where China’s StarTimes satellite network carries CGTN, most people don’t watch because it is in English, a language they don’t speak well, Madrid-Morales said.

“Those who speak English prefer other media, such as Al Jazeera,” he said.

But others caution not to underestimate China’s impact on local media landscapes.

“Journalists criticized Beijing’s propaganda as clumsy and irrelevant and were confident that their own media literacy or political systems would protect the media ecosystem from Chinese encroachment,” IFJ reported. “But when viewed globally, the results looked very different. China is coming out of the Covid-19 pandemic with more positive global coverage of its actions and policies than pre-pandemic.”