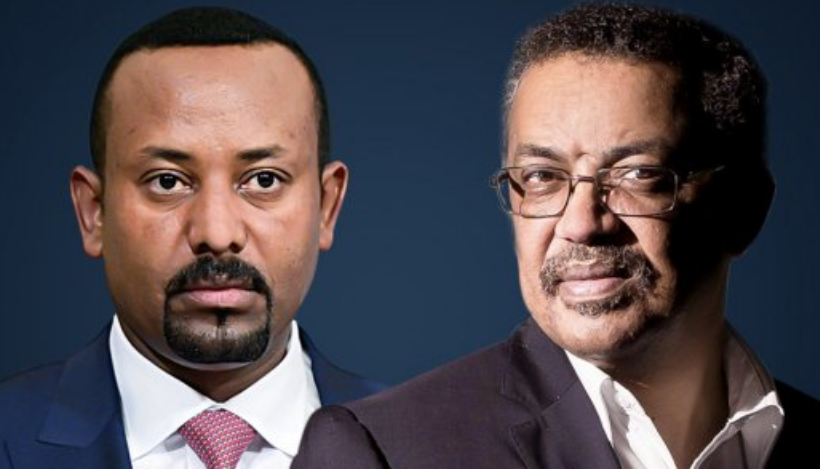 Ethiopia’s prime minister Abiy Ahmed is being openly hostile towards his fellow countryman and the WHO’s director-general Tedros Adhanom Ghebreyesus, who is running for a second term. This rivalry is being exacerbated by the war in Tigray.

Arm in arm, Abiy Ahmed and Tedros Adhanom Ghebreyesus looked like two friends enjoying their reunion. On 8 April 2018, Ethiopia’s Prime Minister Ahmed, who had been sworn in six days earlier, was all smiles with his compatriot, the WHO’s director-general Ghebreyesus, in Addis Ababa. On the agenda of this first meeting were discussions aimed at “strengthening cooperation between the WHO and Ethiopia.” Over the following months, whenever they met, the two men warmly greeted each other.

Tedros and the ‘hell’ of Tigray

Almost four years later, their interactions have changed. Warm congratulations and other kind messages have been replaced by accusations and all kinds of abuse.

The latest episode involved a malicious communiqué, which was published on 13 January and asked the WHO to open an investigation into its director, from the Ethiopian Ministry of Foreign Affairs. Addis Ababa accused “Dr. Tedros”, who was presented as an active member of the Tigray People’s Liberation Front (TPLF), of “interfering in the country’s internal affairs.” The Ethiopian authorities added that he uses his position to “mobilise the UN against Ethiopia.”

The severity of the statement is on par with the Prime Minister’s annoyance. The day before, Ghebreyesus had indeed said that “nowhere else in the world [were we] witnessing a hell like in Tigray.”

He added: “In this day and age, it is so appalling and unimaginable that a government would deny its own people access to food, medicine and everything else they need to survive.”

Although he had already expressed himself several times on the conflict in Tigray, including underlining last November the consequences of the “humanitarian blockade” in the region, rarely had Ghebreyesus attacked Ahmed so directly.

Since 4 November 2020, the latter has been waging a war behind closed doors in the Tigray region against the TPLF, whose leaders previously held the reins of power. Initially presented as a “law and order operation”, the conflict has become bogged down and, a year and a half later, seems to have reached a dead end. As the situation has deteriorated, Ahmed, hailed on arrival for his reformist efforts and awarded a Nobel Peace Prize in 2019, has come under fire from the international community.Africa InsightWake up to the essential with the Editor’s picks. Sign upAlso receive offers from The Africa ReportAlso receive offers from The Africa Report’s partners

A two-time minister, under Meles Zenawi and then Haile Mariam Desalegn, and a long-time TPLF leader, Ghebreyesus has become one of the critical voices. In the first few weeks of the offensive, he maintained a neutral discourse, claiming to be “on the side of peace.” However, he gradually hardened his position towards Abiy. And the PM did the same in return.

Nevertheless, the international community does not believe the rumour that the WHO director secretly supports the Tigrayan rebels. A diplomat in Addis Ababa said it was an “opportunistic” move made at a time when “everyone was beginning to wonder about the humanitarian situation in Tigray.”

The timing of this new confrontation was not insignificant. At the same time that he was accusing his compatriot, Abiy was attempting a surprising political gamble on the domestic front.

On 7 January, the day that Ethiopian Orthodox Christians celebrate Christmas (known as Genna), he granted amnesty to 37 oppositionists, including the Oromo leader Jawar Mohammed and six TPLF leaders. These releases are causing great divisions, especially among the government’s Amhara supporters. However, according to the prime minister, they should help contribute to the “national reconciliation effort” and be accompanied by dialogue.

Recommended by several of Ethiopia’s partners, this outstretched hand allows Addis Ababa to give the impression that the country is turning the page on war. This is despite the fact that no ceasefire has been signed and the authorities’ air strikes alone have, according to the UN, caused 108 deaths since the beginning of the year. It is not surprising, given the context, that the prime minister is redoubling his efforts against those who, like Dr. Tedros, stress the urgency of the situation on the ground.

The other matter to take into account is Ghebreyesus’ position at the WHO. He took office in 2017 and is running unopposed for a second term – at least for now. However, he is facing a surprising amount of hostility from the government that appointed him four years ago.

Can Abiy threaten his re-election? Even though his record as head of the WHO and his handling of the early stages of the pandemic have been – and still are – the subject of criticism, Ghebreyesus still has much support.

“European countries have already secured a broad consensus around his candidacy and the change of administration in the US is working in his favour,” says a Geneva-based African diplomat. As early as the end of September, France and Germany said that they would vote for him in the May 2022 election. While the Trump administration accused him of being too conciliatory towards Beijing, the Biden one seems to be less confrontational.

Loquacious on the issue of vaccine inequality, Ghebreyesus has finally managed to forge good relations with certain African leaders, including Rwanda’s Paul Kagame and Kenya’s Uhuru Kenyatta. Will this be enough to win the day? We will have to wait until May to find out.