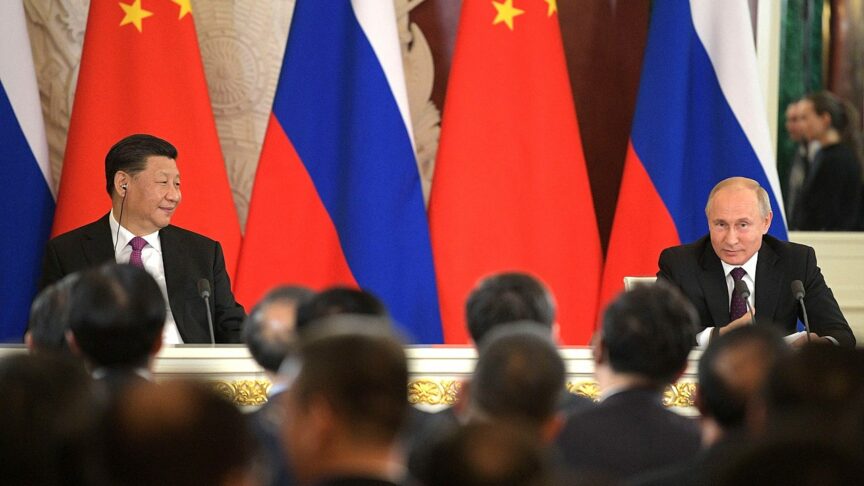 The Russo-Ukrainian War is the most severe geopolitical conflict since World War II and will result in far greater global consequences than September 11 attacks. At this critical moment, China needs to accurately analyze and assess the direction of the war and its potential impact on the international landscape. At the same time, in order to strive for a relatively favorable external environment, China needs to respond flexibly and make strategic choices that conform to its long-term interests.

Russia’s ‘special military operation’ against Ukraine has caused great controvsery in China, with its supporters and opponents being divided into two implacably opposing sides. This article does not represent any party and, for the judgment and reference of the highest decision-making level in China, this article conducts an objective analysis on the possible war consequences along with their corresponding countermeasure options.

I. Predicting the Future of the Russo-Ukrainian War

1.  Vladimir Putin may be unable to achieve his expected goals, which puts Russia in a tight spot. The purpose of Putin’s attack was to completely solve the Ukrainian problem and divert attention from Russia’s domestic crisis by defeating Ukraine with a blitzkrieg, replacing its leadership, and cultivating a pro-Russian government. However, the blitzkrieg failed, and Russia is unable to support a protracted war and its associated high costs. Launching a nuclear war would put Russia on the opposite side of the whole world and is therefore unwinnable. The situations both at home and abroad are also increasingly unfavorable. Even if the Russian army were to occupy Ukraine’s capital Kyiv and set up a puppet government at a high cost, this would not mean final victory. At this point, Putin’s best option is to end the war decently through peace talks, which requires Ukraine to make substantial concessions. However, what is not attainable on the battlefield is also difficult to obtain at the negotiating table. In any case, this military action constitutes an irreversible mistake.

2.  The conflict may escalate further, and the West’s eventual involvement in the war cannot be ruled out. While the escalation of the war would be costly, there is a high probability that Putin will not give up easily given his character and power. The Russo-Ukrainian war may escalate beyond the scope and region of Ukraine, and may even include the possibility of a nuclear strike. Once this happens, the U.S. and Europe cannot stay aloof from the conflict, thus triggering a world war or even a nuclear war. The result would be a catastrophe for humanity and a showdown between the United States and Russia. This final confrontation, given that Russia’s military power is no match for NATO’s, would be even worse for Putin.

3.  Even if Russia manages to seize Ukraine in a desperate gamble, it is still a political hot potato. Russia would thereafter carry a heavy burden and become overwhelmed. Under such circumstances, no matter whether Volodymyr Zelensky is alive or not, Ukraine will most likely set up a government-in-exile to confront Russia in the long term. Russia will be subject both to Western sanctions and rebellion within the territory of Ukraine. The battle lines will be drawn very long. The domestic economy will be unsustainable and will eventually be dragged down. This period will not exceed a few years.

4. The political situation in Russia may change or be disintegrated at the hands of the West. After Putin’s blitzkrieg failed, the hope of Russia’s victory is slim and Western sanctions have reached an unprecedented degree. As people’s livelihoods are severely affected and as anti-war and anti-Putin forces gather, the possibility of a political mutiny in Russia cannot be ruled out. With Russia’s economy on the verge of collapse, it would be difficult for Putin to prop up the perilous situation even without the loss of the Russo-Ukrainian war. If Putin were to be ousted from power due to civil strife, coup d’état, or another reason, Russia would be even less likely to confront the West. It would surely succumb to the West, or even be further dismembered, and Russia’s status as a great power would come to an end.

II. Analysis of the Impact of Russo-Ukrainian war On International Landscape

1. The United States would regain leadership in the Western world, and the West would become more united. At present, public opinion believes that the Ukrainian war signifies a complete collapse of U.S. hegemony, but the war would in fact bring France and Germany, both of which wanted to break away from the U.S., back into the NATO defense framework, destroying Europe’s dream to achieve independent diplomacy and self-defense. Germany would greatly increase its military budget; Switzerland, Sweden, and other countries would abandon their neutrality. With Nord Stream 2 put on hold indefinitely, Europe’s reliance on US natural gas will inevitably increase. The US and Europe would form a closer community of shared future, and American leadership in the Western world will rebound.

2. The “Iron Curtain” would fall again not only from the Baltic Sea to the Black Sea, but also to the final confrontation between the Western-dominated camp and its competitors. The West will draw the line between democracies and authoritarian states, defining the divide with Russia as a struggle between democracy and dictatorship. The new Iron Curtain will no longer be drawn between the two camps of socialism and capitalism, nor will it be confined to the Cold War. It will be a life-and-death battle between those for and against Western democracy. The unity of the Western world under the Iron Curtain will have a siphon effect on other countries: the U.S. Indo-Pacific strategy will be consolidated, and other countries like Japan will stick even closer to the U.S., which will form an unprecedentedly broad democratic united front.

3. The power of the West will grow significantly, NATO will continue to expand, and U.S. influence in the non-Western world will increase. After the Russo-Ukrainian War, no matter how Russia achieves its political transformation, it will greatly weaken the anti-Western forces in the world. The scene after the 1991 Soviet and Eastern upheavals may repeat itself: theories on “the end of ideology” may reappear, the resurgence of the third wave of democratization will lose momentum, and more third world countries will embrace the West. The West will possess more “hegemony” both in terms of military power and in terms of values and institutions, its hard power and soft power will reach new heights.

4. China will become more isolated under the established framework. For the above reasons, if China does not take proactive measures to respond, it will encounter further containment from the US and the West. Once Putin falls, the U.S. will no longer face two strategic competitors but only have to lock China in strategic containment. Europe will further cut itself off from China; Japan will become the anti-China vanguard; South Korea will further fall to the U.S.; Taiwan will join the anti-China chorus, and the rest of the world will have to choose sides under herd mentality. China will not only be militarily encircled by the U.S., NATO, the QUAD, and AUKUS, but also be challenged by Western values and systems.

1. China cannot be tied to Putin and needs to be cut off as soon as possible. In the sense that an escalation of conflict between Russia and the West helps divert U.S. attention from China, China should rejoice with and even support Putin, but only if Russia does not fall. Being in the same boat with Putin will impact China should he lose power. Unless Putin can secure victory with China’s backing, a prospect which looks bleak at the moment, China does not have the clout to back Russia. The law of international politics says that there are “no eternal allies nor perpetual enemies,” but “our interests are eternal and perpetual.” Under current international circumstances, China can only proceed by safeguarding its own best interests, choosing the lesser of two evils, and unloading the burden of Russia as soon as possible. At present, it is estimated that there is still a window period of one or two weeks before China loses its wiggle room. China must act decisively.

2. China should avoid playing both sides in the same boat, give up being neutral, and choose the mainstream position in the world. At present, China has tried not to offend either side and walked a middle ground in its international statements and choices, including abstaining from the UN Security Council and the UN General Assembly votes. However, this position does not meet Russia’s needs, and it has infuriated Ukraine and its supporters as well as sympathizers, putting China on the wrong side of much of the world. In some cases, apparent neutrality is a sensible choice, but it does not apply to this war, where China has nothing to gain. Given that China has always advocated respect for national sovereignty and territorial integrity, it can avoid further isolation only by standing with the majority of the countries in the world. This position is also conducive to the settlement of the Taiwan issue.

3. China should achieve the greatest possible strategic breakthrough and not be further isolated by the West. Cutting off from Putin and giving up neutrality will help build China’s international image and ease its relations with the U.S. and the West. Though difficult and requiring great wisdom, it is the best option for the future. The view that a geopolitical tussle in Europe triggered by the war in Ukraine will significantly delay the U.S. strategic shift from Europe to the Indo-Pacific region cannot be treated with excessive optimism. There are already voices in the U.S. that Europe is important, but China is more so, and the primary goal of the U.S. is to contain China from becoming the dominant power in the Indo-Pacific region. Under such circumstances, China’s top priority is to make appropriate strategic adjustments accordingly, to change the hostile American attitudes towards China, and to save itself from isolation. The bottom line is to prevent the U.S. and the West from imposing joint sanctions on China.

4. China should prevent the outbreak of world wars and nuclear wars and make irreplaceable contributions to world peace. As Putin has explicitly requested Russia’s strategic deterrent forces to enter a state of special combat readiness, the Russo-Ukrainian war may spiral out of control. A just cause attracts much support; an unjust one finds little. If Russia instigates a world war or even a nuclear war, it will surely risk the world’s turmoil. To demonstrate China’s role as a responsible major power, China not only cannot stand with Putin, but also should take concrete actions to prevent Putin’s possible adventures. China is the only country in the world with this capability, and it must give full play to this unique advantage. Putin’s departure from China’s support will most likely end the war, or at least not dare to escalate the war. As a result, China will surely win widespread international praise for maintaining world peace, which may help China prevent isolation but also find an opportunity to improve its relations with the United States and the West